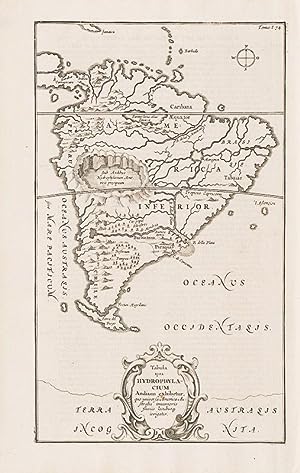 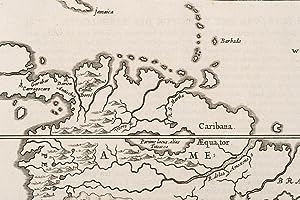 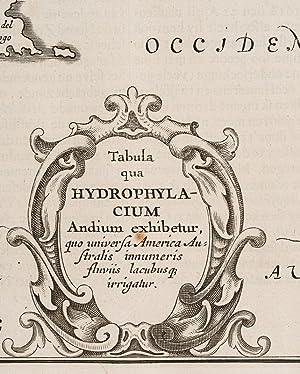 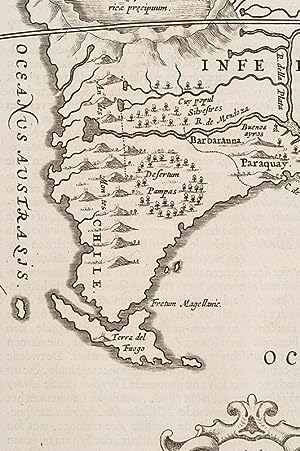 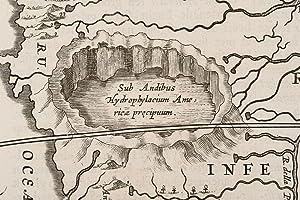 Original Engraving. Plate Size: 20.1 cm x 33.9 cm. Sheet Size: 24.7 cm x 39 cm. Original Map. Very good condition. Very minor instance of foxing to cartouche. Map is orientated to the North. Dutch text on reverse. A richly elaborate and highly imaginative map of South America ('America Inferior') from the Panama Isthmus in the north to Terra del Fuego in the south. The south part of Jamaica and Barbados are shown near the top of the map. Ascension Island is also shown off the coast. The continent appears bulging and does not bear the more elongated form of later maps. River, lake, forest, mountain and volcano features are engraved on the map: the Amazon river, Andes mountains and Lake Titicacca ('Parime lacus, alias Titicacca') are all shown. The settlements of Darien, Carragocaro, and 'Buenos ayros' are identified. 'Peru', 'Chile' and 'Paraquay' all appear on the map, but political details - such as borders - are absent. An unknown and imagined 'Terra Austrasis Incognita' lies at the bottom of the map. Decorative title cartouche at the lower section of the map. However, the map stands out for the craterous lake depicted at the centre of the map, between the Equator and the Tropic of Capricorn. It is captioned as 'Sub Andibus Hydrophylacium America precipuum'. This is one of several maps prepared by Kircher to illustrate his unique hydro-geographic theory. Kircher hypothesized that tides and currents are caused by water moving to and from a massive subterranean ocean. Kircher further postulated that water entered and exited the subterranean ocean via a number of great abysses situated around the globe. In addition, he believed that massive underground lakes lay beneath most of the world's great mountain ranges. The map appeared in Kircher's book, Mundus Subterraneus (The Subterranean World) that was first published in 1665 laying out his (pseudo-) scientific theories on hydro-geology. Athanasius Kircher, (1602 - 1680) was a German Jesuit scholar and polymath who published around 40 major works, most notably in the fields of comparative religion, geology, and medicine. Kircher has been compared to fellow Jesuit Roger Boscovich and to Leonardo da Vinci for his enormous range of interests, and has been honoured with the title "Master of a Hundred Arts". A refugee from the war-torn German territories, he taught for more than forty years at the Roman College, where he set up a museum-type cabinet of curiosities or wunderkammer. A resurgence of interest in Kircher has occurred within the scholarly community in recent decades. A scientific star in his day, towards the end of his life he was eclipsed by the rationalism of René Descartes and others. In the late 20th century, however, the aesthetic qualities of his work again began to be appreciated. One modern scholar, Alan Cutler, described Kircher as "a giant among seventeenth-century scholars", and "one of the last thinkers who could rightfully claim all knowledge as his domain". Another scholar, Edward W. Schmidt, referred to Kircher as "the last Renaissance man". (Wikipedia). N° de ref. del artículo 200011AG


We accept payment with Paypal, Visa, MasterCard, American Express, wire
transfers in EURO. When ordering, please include full name and address as well as your phonenumber and email.

We guarantee that all Items are complete unless otherwise stated. All Items can be assumed to be in very good condition, unless stated otherwise. We only sell genuine antiquarian books, maps, prints and photographs. If any of our items are reproductions or facsimiles, it is clearly stated in our descriptions. All ite...


All our books are packed safely and securely with professional, stiff cardboard - packaging designed for the protection of rare books.
You can ask for special express delivery (with additional costs applying), otherwise all books are shipped per priority airmail
or a courier of our choice. Books with a value of more than 75 Euros are sent per registered mail.