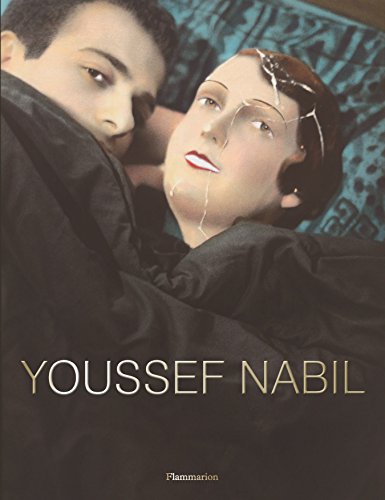 The influence of cinema is evident in Egyptian photographer Youssef Nabil’s work, which oscillates between a personal photographic journal and portraits featuring internationally renowned film stars, directors, popular musicians, artists, architects, and choreographers. He uses an unusual technique of coloring gelatine silver prints by hand or drawing over color prints of subjects ranging from self-portraits to landscapes to portraits. This technique was inspired by seeing Egyptian artists color film posters in his youth. Using this technique―part photography and part painting―he creates an imaginary reality that reflects both the paradoxes of the Middle East today and the flamboyant fantasies of the golden age of Egyptian film in the cosmopolitan prerevolutionary years in Cairo. He has also photographed many international stars, including Sting, John Waters, David Lynch, Isabella Rosselini, Paolo Coelho, Gilbert & George, Tracey Emin, Louise Bourgeois, Jean Nouvel, Zaha Hadid, Julian Schnabel, Omar Sharif, and Robert Wilson. Since 2003, he has produced a number of self-portraits that reflect his dislocated life away from Egypt―often from behind or in profile, and either naked or in a djellaba ― in settings linked to his childhood or his travels: at the Alexandria port, or in Istanbul, Cairo, Paris, Marseille, or Los Angeles. These scenes portray a combination of worldly realities and serene dreams, loneliness and fame, eroticism and death. This beautifully produced monograph is completed by a critical essay from Hans Ulrich Obrist and an interview with artist Marina Abramovic, which offer incisive perspectives that elucidate the creative trajectory and evolution of the artist.