ArtĒculos relacionados a Will Rogers: Ambassador Of Good Will, Prince Of Wit...

Portada O'Brien, P.J. Will Rogers: Ambassador Of Good Will, Prince Of Wit And Wisdom 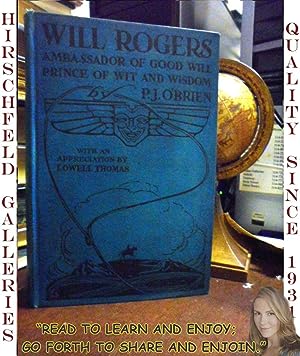 Will Rogers: Ambassador Of Good Will, Prince Of Wit And Wisdom

This 288 page salute, being an increasingly well respected and energetically applauded offering it is proudly presented with great and well deserved hubris by Hirschfeld Galleries in BOTH the publishers original binding and original dustwrapper. The binding is full sky blue decorative cloth, and this baby is rock solid, tight and clean as a whistle. Totally unbumped but does have a bit of sunning to the spine. Rare to find in such nice condition. Illustrated with 23 pages of photographs. Crisp, clean, attractive sky-blue cover decorated with winged theatre mask of comedy above a mounted figure and a very large lasso. Inside, you'll learn how Will Rogers was first an Indian, a cowboy then a national figure. He now is a legend. Born in 1879 on a large ranch in the Cherokee Nation near what later would become Oologah, Oklahoma, Will Rogers was taught by a freed slave how to use a lasso as a tool to work Texas Longhorn cattle on the family ranch. As he grew older, Will Rogers' roping skills developed so special that he was listed in the Guinness Book of Records for throwing three lassos at once: One rope caught the running horse's neck, the other would hoop around the rider and the third swooped up under the horse to loop all four legs. Will Rogers' unsurpassed lariat feats were recorded in the classic movie, "The Ropin' Fool." His hard-earned skills won him jobs trick roping in wild west shows and on the vaudeville stages where, soon, he started telling small jokes. Quickly, his wise cracks and folksy observations became more prized by audiences than his expert roping. He became recognized as being a very informed and smart philosopher--telling the truth in very simple words so that everyone could understand. After the 10th grade, Will Rogers dropped out of school to become a cowboy in a cattle drive. He always regretted that he didn't finish school, but he made sure that he never stopped learning--reading, thinking and talking to smart people. His hard work paid off. Will Rogers was the star of Broadway and 71 movies of the 1920s and 1930s; a popular broadcaster; besides writing more than 4,000 syndicated newspaper columns and befriending Presidents, Senators and Kings. Alas, when all is said and done and the proverbial geese have come home to nest or roost, or whatever, and you're ready to decide to invest some of your hard-earned cash in this lofty offering, please consider that this book does indeed have the four absolute uppermost qualities we at Hirschfeld Galleries since 1931 have always sought, and demanded, in books: 1) excellence in content, 2) literary quality, 3) appealing design, and 4) significance of contribution. Another great altruistic offering opportunity for us and an even greater opportunity for self-actualized reception on your part. But enough of the lugubrious however allegorically wise jaw-jacking, enough said of the telluric parameters of select Hirschfeld Galleries' offerings such as this one which take on a life of their own and speak so very loudly for themselves. Read to learn and enjoy; go forth to share and enjoin. Research, analysis, dissertation, lucubrations or just enjoyment, this is the one. ACTUAL BOOK FOR SALE PICTURED. PLEASE DOUBLE CLICK ON IMAGE TO ENLARGE. Size: 8vo - over 7Š" - 9Š" tall. N░ de ref. de la librerĒa 007925

TĒtulo: Will Rogers: Ambassador Of Good Will, Prince...

Hirschfeld Galleries, Established in 1930, is a full-line used, collectible, rare, and antiquarian book dealer located in Saint Louis, Missouri. Our collection comprises over 100,000 items, collected over 5 generations. We specialize in fine bindings, first editions, private press, early printed, and incunabula. We are happy to consult to institutions, private collectors, and the trade. We can offer appraisals, rare book searches, and collection advice.


We accept payment in the form of US check, money order. We accept Visa or Mastercard, but for discounted items we prefer payment by check. If paid by credit card we will only ship to the BILLING ADDRESS for the credit card.

We require that all purchases over $100 be insured. Thank You.