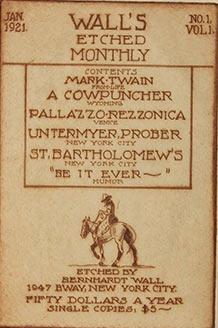 4to. 7.5 x 10.75 inches. Edition of 125 copies; original wraps with etched cover label; signed, dated Jan. 1921 and annotated in pencil "Copy no 8." 14 etchings (plus cover label and 2 etched ad leaves). Several signed and dated 1937 in pencil including, Mark Twain; A Cowpuncher; Palazzo Rezzonico, Venice; Samuel Untermeyer; St. Bartholomew's, Park Avenue; A Hobo. Various colored inks. 27.0 x 20.5 cm., heavy wove paper, tissue guards. Original hand-bound light brown stiff wrappers with etched label on upper cover. Bernhardt Wall was born in Buffalo, New York on Dec. 30, 1872. He studied at the Buffalo Art Student's League then moved on to study in New York under Henry Reuterdahl and also apprenticed under William Auerbach-Levy. Wall began a career as a lithographic illustrator in 1889 working primarily as a commercial artist in New York and Buffalo. He soon became known as the "Postcard King" and designed over 5,000 comic cards. The year1915 marked a defining point in Wall's artistic career. Wall visited Colorado, Nevada and California making etchings of Indians, cowboys and major cities which were later published in a portfolio entitled, "Under Western Skies." These proved to be very successful and the artist shortly thereafter moved to California permanently. Wall continued to produce many fine etchings of the American West and by 1930 had also become a much respected historian of the region.Bernhardt Wall was unique in that he not only drew the etchings for his books, but he also printed and bound them. His books are in libraries and universities around the world including the British Museum, Library of Congress, the libraries of Harvard, Yale, Columbia, and Brown Universities. His works were also in the private collections of J. P. Morgan, Franklin D. Roosevelt, Henry C. Frick and Dr. N.C. Mathewson. Wall etched three sitting presidents of the United States, Theodore Roosevelt, Warren Taft, and Henry Coolidge. Other prominent individuals etched by Wall include Sam Houston, Mark Twain, Thomas A. Edison, Abraham Lincoln, and Andrew Jackson.Artist and historian, Bernhardt Wall (1872-1956) was a pioneer etcher and producer of fine press books who treated a vast array of subjects, including Texas and the Southwest. Historians of fine press printing have compared him to William Blake. This collection of Wall's scrapbooks, publications, and correspondence was built by collector Natalie Williams of Marshall, Texas. N░ de ref. de la librerĒa 51-2221

We deal in antiquarian books, prints, posters, paintings and other art related material. We are also a publisher and distributer of art reference books, primarily catalogues raisonnķs. We are related to Alan Wofsy Fine Arts and Dow & Frosini. Look for us at www.art-books.com