Artículos relacionados a THE WORKS OF THE RIGHT REVEREND JONATHAN SHIPLEY, LORD... 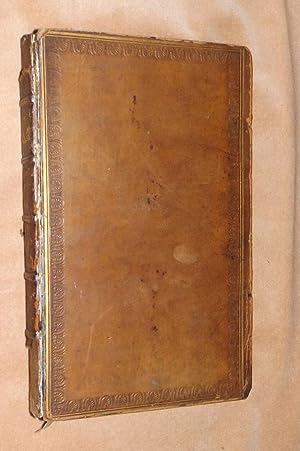 Octavo, full calf with gilt rules and embossed decoration, marbled end papers, and edges, parts of spine missing and covers present but detached, internally clean and bright, text block sound, vii plus 358 pages, a reference/rebinding copy. [In 1774, when the British Parliament were discussing punitive measures against the town of Boston after the Tea Party incident, Shipley was apparently the only Church of England Bishop (who were legally constituted members of Parliament) who raised his voice in opposition. He prepared a speech in protest of the proposed measures, but was not given the opportunity to present it. Therefore he had it published, but due to the general feeling in England against the rebellious colonies, the speech had no effect. In the speech he pointed out that in the year 1772, the Crown had collected only 85 pounds from the American colonies. He stated: "Money that is earned so dearly as this ought to be expended with great wisdom and economy." For these views, St. Asaph Street in Old Town, Alexandria, Virginia, in the United States, is named in Shipley's honour. This speech is included in this volume] This volume only. [QP]. N° de ref. de la librería 8091

Título: THE WORKS OF THE RIGHT REVEREND JONATHAN ...


Please return books to us within fifteen working days. Card payment is accepted through Abebooks. If you wish to pay by cheque - Sterling cheques only made payable to R. L. Greenhalgh(we regret that cheques in other currencies can not be accepted at this time). We accept payment through PayPal (our account is as our e-mail address - portmanrarebooks@btconnect.com)


Orders usually ship within 2 business days. Shipping costs are based on books weighing 2.2 LB, or 1 KG. We have a minimum for postage and packaging. If your book order is heavy or oversized, we may contact you to let you know extra shipping is required. If in doubt please contact us.