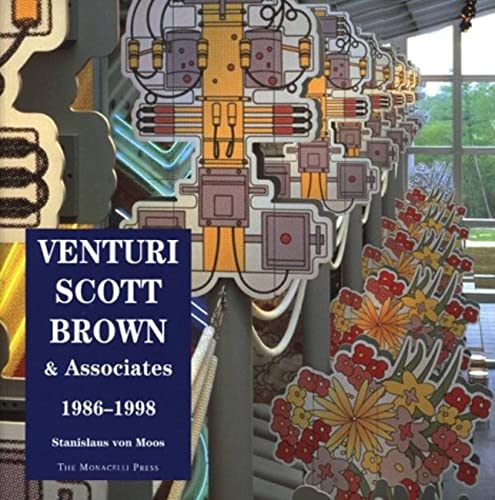 Robert Venturi and Denise Scott Brown are among the world's leading contemporary architects. Their writings, including the seminal books Complexity and Contradiction in Architecture (1966; Venturi) and Learning from Las Vegas (1972; Venturi, Scott Brown, and Steven Izenour), have profoundly influenced architectural thought. The built work of the firm Venturi, Scott Brown & Associates of Philadelphia has had an equally great impact. Through a commitment to a creative understanding of history and the everyday environment and to the use of visual references in the design of buildings, this firm has changed the face of modern architecture. Guild House (1963), the Vanna Venturi House (1963), and Franklin Court (1976), all in Philadelphia, are key examples of a new outlook on the art of building.

This landmark monograph -- assembled in collaboration with the architects -- illustrates the firm's work between 1986 and 1998. In his main text, Stanislaus von Moos analyzes the architects' understanding of tradition in relation to the social and urban complexities of our post-industrial, multicultural era. Featured are acclaimed buildings such as the Sainsbury Wing of the National Gallery in London; the Seattle Museum of Art; buildings for such universities and colleges as Princeton, the University of Pennsylvania, Harvard, UCLA, and Dartmouth; and new works, including the San Diego Museum of Contemporary Art, the hotel and recreation center in Nikko Kirifuri, Japan, and the administration building for the Département de la Haute-Garonne in Toulouse, France.