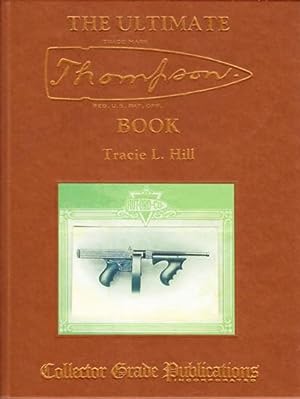 Virtually every chapter and topic covered in Tracie Hill's critically acclaimed 1996 Collector Grade title Thompson: The American Legend has been expanded, and some new ones have been added in order to incorporate a vast amount of important new information augmenting every aspect of the history of the Auto Ordnance Corporation, the Thompson family, and the design and production of the hardware that bears the Thompson name. Much of this priceless new material, including personal memoirs, dimensioned blueprints and other rare memorabilia, has been bequeathed by key people who were intimately involved in the day to day operations of the company. The post WWII history of the Thompson begins with more new documentation concerning the Kilgore Manufacturing Company, historically a manufacturer of cap pistols and pyrotechnics. Kilgore's plans to re-launch the M1A1 Thompson came to naught, and the next incarnation of Auto Ordnance was as part of the Numrich Arms Corporation in West Hurley, New York. Then the story shifts yet again, with up to date coverage of the products of the current proprietors, Kahr Arms. Chapters on Thompson drum and box magazines are expanded to include original manufacturing drawings and operation detail sheets. Chapters on Web Gear, Other Ancillaries, and Models and Miniatures; then over 100 pages of updated listings of serial numbers of all 15,000 Colt Model 1921 Thompsons, with shipping dates and dispositions where known. Then an impressive display of rare, colorful original paper-handbooks, brochures, price lists, catalogs, and military manuals, both U.S. and foreign. N° de ref. de la librería 000043


Credit and debit cards accepted, we regret we are unable to accept PayPal, other methods of payment will be accepted by arrangement. Goods will be dispatched on receipt of payment. We reserve the right to refuse orders from rude or abusive customers.
Contact us by e-mail at info@militaria.co.uk, or by telephone on 01206-368-787. Registered VAT number 802-7387-33.


Orders usually ship within 2 business days, by Royal Mail Recorded service within the UK, by Royal Mail International Signed Ror airmail service to adresses outside of the UK, or by Courier if the book weighs over 1kg.
We regret we are unable to send to PO BOX adresses in some countries as insurance is not always available, we will contact you to arange delivery to a diferent adress if this is the case for your country.
Shipping costs are based on books weighing 2.2lb, or 1kg. If your book order is heavy or oversized, we will contact you to let you know extra shipping is required.