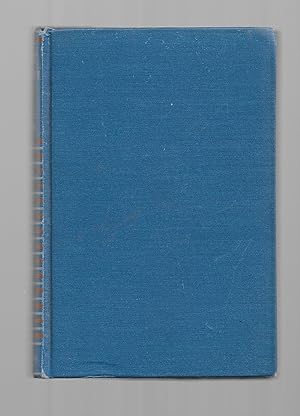 Blue cloth with red and grey stripes to the spine, grey lettering. Light rubbing to all edges, bump to head and heel of spine. Text is clean and bright, no marks. "The theme of Trumpet Voluntary is expressed by the little eighteenth century china monkey who stands on the mantelpiece in one of the rooms in the Albany, London. He stands there trumpeting a joyful celebration of life irrepressible against the overwhelming menace of death - like David against Goliath; like the rosy willow herb thrusting up among the Bond Street ruins. She discusses the perils of loving a Persian rug, rivers and youth love on the river, the magic of words and Winston Churchill, windows and enchanting views and what the Military Tailors suddenly saw from theirs, juvenile bad taste, her nostalgia for Provence, the psychology of eggs in wartime, the books and pictures and gramophone records one would choose for a lifetime on a desert island, insomnia and Dorothy Parker, life-givers and life-takers, Pétain's mailbag, rainbows, the Lunts, the legacy of her Spanish great-grandfather's Tunis Order of the Nischan-el-Iftikhar, luck and coincidence and miracles, a Christmas card from America, the benison of normality, Shakespeare and banishment, compassionate leave and adaptabillity and Stephen Vincent Bęnet and the moral of the cat who sat on the mat.". N° de ref. de la librería B12118

Your satisfaction is important to me! If you are dissatisfied with your purchase, your book
may be returned within 14 days of purchase with some restrictions. A full refund will be issued upon
safe receipt of the returned item. I am a stickler for this: Book MUST be returned IN THE ORIGINAL
PACKAGING. Books that are not carefully re-wrapped and sent back will NOT be accepted. If the book is
returned damaged, I will ship it back to you for an additional ch...


Orders generally ship within two days of ordering, more often on the same day.
Shipping costs are based on books weighing 2.2 LB, or 1 KG. If your book order is heavy or oversized, we may contact you to let you know extra shipping is required.