Artículos relacionados a Syllables of Recorded Time: The Story of the Canadian... 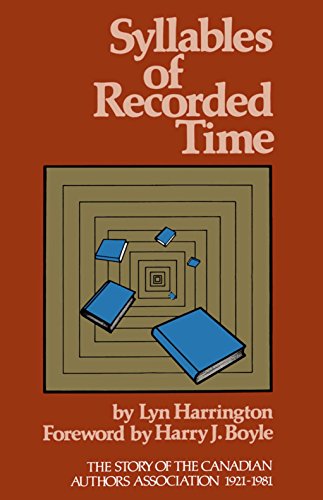 Título: Syllables of Recorded Time: The Story of the...

Syllables of Recorded Time is a lively look at the development over the last six decades of a national authors' association, with all its problems and foibles.

Syllables of Recorded Time highlights the discussions and legalities regarding issues of copyright, contracts, women's role, cultural domination by Britain and the U.S.A., government funding and markets for writers. It tells why there was a spinoff of specialized interests including the Canadian Writers' Foundation, the League of Poets, the Governor General's Awards, the Canadian Copyright Institute, the Canadian Society of Children's Authors, Illustrators and Performers and the Writers' Union of Canada. Harrington vividly portrays all facets of the organization in this valuable resource book.

Located near the East Bank of the University of Minnesota, we've been providing quality used books to the Twin Cities area for over 40 years. With over 30,000 books in the store and over 30,000 in our warehouse, there's plenty to look at both in store and online.


Our phone number is 612-331-1430. We take Visa, Mastercard and American Express,
but ABE will process your credit card unless it is American Express. We also
take checks, but you must notify us directly to hold a book for check and
shipment. We ship & bill to libraries. Shipping terms are set by ABE. All books
returnable for any reason. The Book House in Dinkytown, Inc (U.S. S-Corp). 1316
4th Street SE, Suite 201, Minneapolis, MN 55414. Our email is
bookhouseonline@gmail.com. Please address your...


Orders usually ship within 1-2 business days. Shipping costs are based on books
weighing 2 pounds. If your book order is heavy or oversized, we may contact
you to let you know extra shipping is required.