Artículos relacionados a Sex and Suits 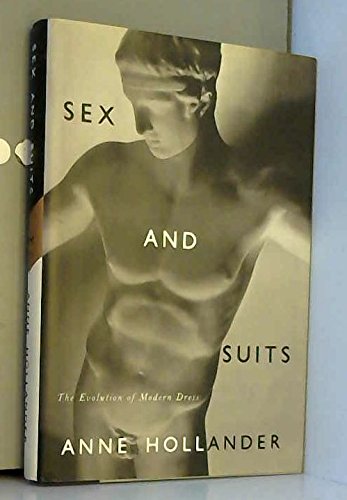 From an art historian admired for her brilliance and wit, a provocative argument for the value of modern fashion as sexual expression, with the tailored suit as its strongest example.
Dress was equally showy for men and women until the late eighteenth century, when natural simplicity and understatement on the model of the Classical Greek nude became fashionable, but for men's clothes only. After that, obvious sexual display in dress was left to women - and it came to seem both shameful and esthetically inferior by comparison, despite its variety.
Hollander shows how modern women adapted men's tailoring to their richer scheme of display, making suits do for women what they had long done for men: show their sexuality to be central, serious and interesting, rather than irrational, shallow and dangerous. She shows us, too, how men - now that women have adopted every element of male style - are recapturing the color and ornament they long found taboo, without giving up the potent beauty of tailored suits, which women have made universal.
Richly informed, surprising, entertaining, Sex and Suits gives us a fresh view of what we have long taken for granted, and a new context for thinking about our society.