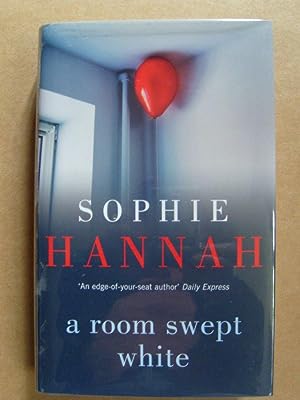 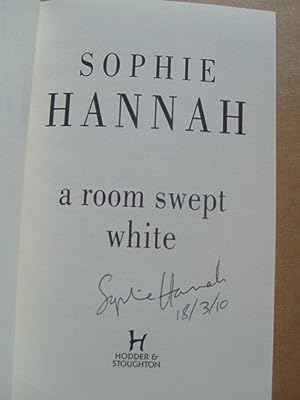 'Enthrallingly complex ... A multi-stranded narrative that grips' -- The Sunday Times 'Intriguing, unnerving and engrossing ... Hannah has timing down to an art. What she has created in A ROOM SWEPT WHITE is more than a murder mystery. It is the most adept of psychological thrillers, in which - as with Hannah's other novels - the psychosis lying just below the surface of the human personality is exposed ... A remarkable novel, and an adventure to read ... Undoubtedly a first-class whodunit that will keep you reading long into the night.' -- Scotsman 'Sophie Hannah has been rightly praised for intricate and accomplished psychological thrillers which dissect the dark side of human relationships, and her fifth novel, A ROOM SWEPT WHITE, covers obsession, manipulation, meltdown and all points in between.' -- Guardian 'Sophie Hannah has quickly established herself as a doyenne of the 'home horror' school of psychological tension, taking domestic situations and wringing from them dark, gothic thrills ... Combining probability theory, poetry and murder, this is a densely plotted suspenser with a coded puzzle that would grace a Golden Age mystery.' -- Financial Times 'A perplexing thriller with intrigue and infanticide ... It's a given that nothing will be as it seems in the latest psychological thriller from Sophie Hannah, who marries complex plots with crisp, conversational prose' -- Marie Claire 'As Hannah sees it things are rarely clear cut and it is this moral ambivalence that makes her fiction so provocative' -- Daily Express 'She writes beautifully, the narrative races along with the reader breathlessly trying to catch up and the subject matter is fascinating. This is her fifth psychological suspense thriller and, like the others, it's destined for bestsellerdom.' -- Carla McKay, Daily Mail 'Hannah takes domestic scenarios, adds disquieting touches and turns up the suspense until you're checking under the bed for murders ... it's this real-life research that helps make it so convincing - and so unsettling' -- Independent 'Hannah is a master of intense psychological thrillers ... Full of twists and turns, and terrifying, too' **** -- Heat 'Brilliantly pacy and penetrating psychological thriller' **** -- Daily Mirror 'A cleverly plotted psychological thriller by an author with a growing reputation for intelligent, creepy, crime novels.' -- Choice 'Sophie Hannah has a poet's eye, and she creates characters and settings of closely observed complexity in her psychological mysteries.' -- Daily Telegraph 'Taut, ingenious' -- Sunday Express 'Guaranteed to chill on even the hottest day.' -- Independent 'The title really sells it. It's creepy stuff, which Sophie's things often are, quite necessarily.' -- Tana French, Irish Times 'When it comes to ingenious plots that twist and turn like a fairground rollercoaster few writers can match Sophie Hannah. Hannah's complex and beautifully written tale kept me guessing right till the very last page.' -- Daily Express


Please contact me before returning a book.
Returns are accepted within 30 days of despatch of item. A refund will be given
on
return of the book in original condition. Please note that the cost of return
postage will not be refunded.
If the book is returned because it is not as described or has been damaged in
the
post, a full refund will be given including the cost of return postage.


Orders usually ship within 2 business days. Shipping costs are based on books weighing 2.2 LB, or 1 KG. If your book order is heavy or oversized, we may contact you to let you know extra shipping is required. Please note that if Standard Shipping is chosen for book orders for countries outside Europe your order will be sent by Surface Mail and delivery could take up to 45 working days. Please choose Priority Shipping for airmail. International orders for pattern leaflets and booklets will be sent airmail as Standard and Airsure or International Signed For as Priority.