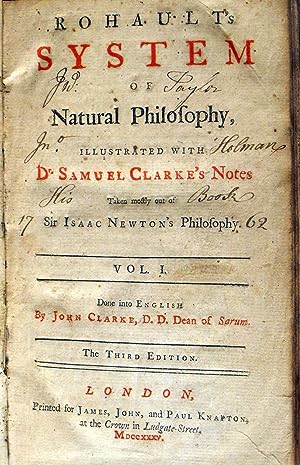 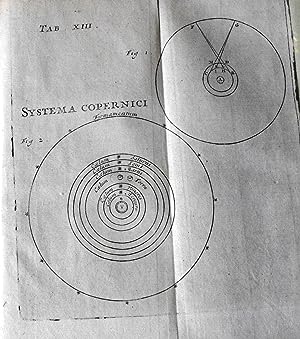 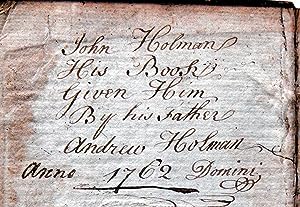 2 volumes. 8vo, 197 x 118 mms., pp. [xxxii], 285 [286 adverts]; 292 [293 - 315 Index, 316 adverts], 14 folding engraved plates at end of volume 1, 13 folding engraved plates at end of volume 2, for a total of 27 plates as called for, title-pages in red and black, contemporary calf; lacks titling labels, joints a bit strained, but a good copy. The contemporary names "Jho [John] Taylor" and "Jno [also John] Holman," with confirming ownership inscription on front paste-down end-paper of volume 1, "John Holman/ His Book/ Given Him/ By his Father/ Andrew Holman/ Anno 1762 Domini," with Holman's autograph on the title-page and that of "J. W. Taylor" as well. Taylor is probably the oculist John Taylor (1703 - 1772), who operated on such celebrities as Bach, Gibbon, and Handel, and perhaps contributed to Handel's death. Samuel Johnson said of him, hat his life showed "an instance of how far impudence may carry ignorance." On the rear paste-down end-paper of volume 1, a contemporary hand has written: "Good men as well as bad/ Have sometimes fortune sad." The French Cartesian Jacques Rohault (1618 - 1672) published his Traité de Physique in 1671; it was widely used a a textbook for the next 50 years and was reprinted more than twenty-five times between 1671 and 1739. John Ellis, a tutor at Caius College, Cambridge, asked Samuel Clarke (1675 - 1729) to translate the work into Latin, with editions published in 1697, 1702 and 1710. Clarke's brother, John Clarke (1682 - 1757), a distinguished Cambridge mathematician then translated the work into Englsh; the first edition was published in 1723, followed by a second edition in 1729. The work of the two brothers played a major part in moving Cambridge's mathematicians and physicists away from Cartesianism and towards Newtonianism. See Laura Benítez Grobet: "Jacques Rohault's system of natural philosophy," in Nudler, Oscar (ed.), Controversy Spaces: A Model of Scientific and Philosophical Change (2011), Chapter 6. N° de ref. de la librería 7931