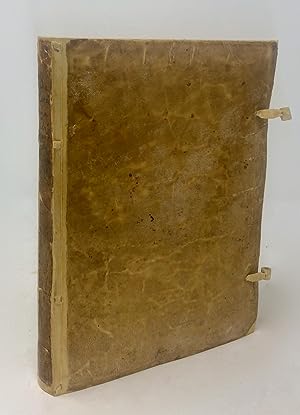 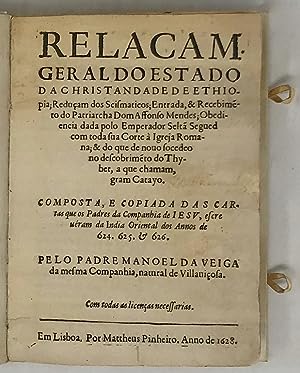 4to. (7 1/4 x 5 1/4 in.; 18.4 x 13.3 cm.). Woodcut head-piece and initial preliminaries with one or two discreet repairs not affecting the text. Contemporary limp vellum, yapp fore-edges, original free endpapers; expertly recased with modern vellum preserving the original spine and covers, vellum ties renews, endpapers renewed. PROVENANCE: early signature partially obscured on title-page and scholarly notes on verso of original free endpaper; with John Howell, bookseller. THE EARLIEST COMPREHENSIVE ACCOUNT OF TIBET. First edition, and AN ATTRACTIVE COPY. Da Veiga was a Jesuit missionary principally in Ethiopia, and the first two sections of this book discuss the activities of the Jesuits in that country. In the third section, entitled "Das Covsas do Reyno do Gram Thybet, a que chamam Catayo, que de nono socederam nos Annos de 625. & 626", da Veiga recounts in five chapters how he accompanied Antonio de Andrade on his second journey into Tibet in 1625 to establish a permanent mission. Veiga includes an account of Andrade's first journey into Tibet from India in August of 1624, the first by any European to reach Tibet, and goes into great detail about their expedition, their work at Tsaparang, and negotiations with local lamas and the Tibetan religion. Da Veiga (1566-1647), a Jesuit contemporary of Andrade's, continues this tradition with an account of Andrade's heroic discovery of the country, the establishment of good relations with the government, and the founding of a mission in Tsaparang with the support of the reigning monarch. Written with hagiographical and propandist intent, the work is nonetheless an important historical document, since in providing an account of the Jesuits' contretemps and public disputations with the lamas, it reported some of the first ethnographic data on the native Tibetan religion and related customs to a European audience. REFERENCES: DBS VIII, 530 no.2; Silva VI, p. 121; Cordier Sinica 2901. N° de ref. del artículo 72lib3

Arader Galleries has specialized in the field of color plate books and early works on paper for over thirty years. Our main specialisms are Americana, Maps/Atlases, Voyages and Natural History (with a special focus on the works of John James Audubon). We would be delighted to answer any questions you may have about any of the books listed on ABE or to welcome you to our gallery in New York.


We guarantee your satisfaction.