Artículos relacionados a Private Demons : The Tragic Personal Life Of John A.... 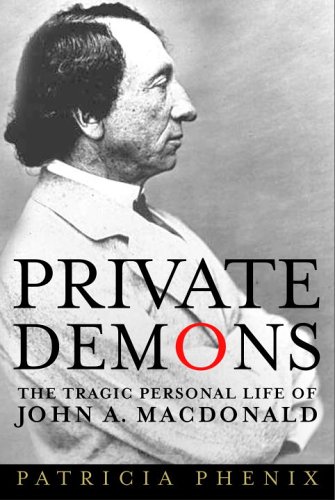 Private Demons : The Tragic Personal Life Of John A. MacDonald

The first book to expose the turbulent personal life of this fascinating Father of Confederation.

Prime Minister Sir John A. Macdonald once remarked, “I had no boyhood,” an understatement if there ever was one. Indeed, John A.’s Dickensian childhood, filled with poverty, alcoholism, and the beating death of his five-year-old brother at the hands of a drunken babysitter (a friend of his father, Hugh’s), set the stage for a political power grab that has seen no equal in Canadian history.

In Private Demons, bestselling author Patricia Phenix explores through Macdonald’s family journals, diaries, and never-before-seen letters the troubled man behind Canada’s most successful politician. Phenix describes a man of myriad contradictions: patient, yet prone to settle fights with his fists; ethical, yet capable of pilfering corporate profits to pay private debts; shy, yet wildly flirtatious; sociable, yet so desirous of solitude he built escape hatches into the walls of his homes. She also examines reports that Macdonald’s depression became so deep that he once attempted suicide. Ultimately, in an obsessive need to escape his childhood demons, he sacrificed friends, family members, and financial security to achieve his single greatest ambition ― to design and control the destiny of Canada.

Private Demons paints a vivid portrait of nineteenth-century society while exploring the amazingly tumultuous domestic life of our most famous prime minister.


Payment accepted through AbeBooks only. Credit cards currently accepted only through AbeBooks. Shipping is extra. Shipped Surface mail unless arranged. Careful packaging and prompt shipment. If you would like a scan of any book you are interested in just e-mail us quoting the title and author and we will send you an image of the book within 24 hours of receiving your request. Please feel free to email me if you would like further information about this book. We try to describe all books as accur...


Orders usually ship within 2 business days. Shipping costs are based on books weighing 2.2 LB, or 1 KG. If your book order is heavy or oversized, we may contact you to let you know extra shipping is required. If the book is being shipped outside of Canada and it is a small book or a paperback the shipping will be reduced at time of order. We only charge for postage not handling.