Artículos relacionados a The Politics of Technological Change in Prussia 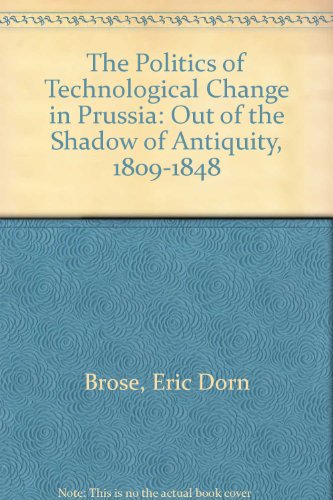 The Politics of Technological Change in Prussia

1st PRINTING. SIGNED. This copy is LIKE NEW; the text is clear, bright, and unmarked; binding is tight. Apparent first edition (unstated but earliest appearance of the book). Signed by author. The jacket is VG: absolutely intact in all ways, including perfect color and design, but sunning on spine. We have a five star rating because of our fulfilment success and because our descriptions are accurate. All shipments within U.S. sent with Tracking. On foreign sales, because of the heavy weight of this book, we have to charge extra for shipping: however, we will only charge the difference between our regular shipping rate and the extra charge that the U.S.Post Office asks to ship the book. We guarantee: NO NASTY SURPRISES. N° de ref. de la librería 006752

Título: The Politics of Technological Change in ...

Throughout the 1800s the process of industrialization contributed to painful social upheaval and wrenching political readjustments in the Kingdom of Prussia, traditionally viewed as Europe's great, modernizing, economic leader. This book illuminates the early years of this transition by examining the contradictory economic policies adopted by the state after Prussia's defeat by Napoleon. A fascinating history of modernization emerges as Eric Dorn Brose explores competing visions among soldiers, businessmen, and bureaucrats, who, largely influenced by the ideals of classical antiquity, conceived of industry in ways quite different from what it actually came to be. Brose focuses on the varying attitudes of Prussians toward their own times, the nature of the Prussian state, and the ways the state both helped and hindered early industrialization. In a highly nuanced analysis of the rivaling intrastate agencies, cultures, and political factions that shaped state policy, he accords a pivotal role to Frederick William III. Included is an investigation of the political struggle over ownership, control, and promotion of the forces of production--a crisis that was only gradually resolved at the end of the century.