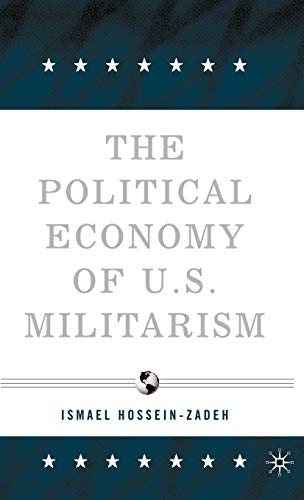 'Ismael Hossein-zadeh's penetrating analysis of the role of the military-industrial complex in driving U.S. foreign policy and rearranging domestic priorities could not be more timely. With U.S. military spending at levels higher than the peak years of the Vietnam War, Hossein-zadeh provides the most cogent explanation yet of how we got to this point.'

'America has been overrun not by military force, but by the force of militarism. Using statistics, analysis and historical references, Hossein-zadeh reveals the troubling picture that America may have succumbed to militarism despite the warnings of Washington, Eisenhower and Butler. Hossein-zadeh reveals the true cost of Pentagon programs by adjusting the federal budget for Social Security and unmasking the insatiable, consuming maw of spending run amok. He reveals how budgetary militarism is defeating the New Deal, even as it musters a long term assault on the Bill of Rights and other foundations of American democracy. The Political Economy of U.S. Militarism is a must-read for patriots concerned about the future of the United States.' - Grant F. Smith, Director of Research, Institute for Research, Middle Eastern Policy

'Writing in a scholarly but accessible manner, Ismael Hossein-zadeh provides an impressive overview of policy trends, their historical background and their political and economic influences. In examining the recent tendencies towards war and militaristic responses to foreign policy issues, the author looks past the now dominant neo-conservative justifications, focusing on the powerful interests that lie beneath.' - David Gold, Associate Professor, International Affairs Program, The New School

'Ismael Hossein-zadeh has produced an original and powerful synthesis of previous explanations of contemporary U.S. militarism. He locates the relevant economic, political, and ideological forces within a power-elite military-industrial complex framework firmly grounded in a structural analysis of capital accumulation. By steering past the twin dangers of conspiracy theory and economic reductionism, this framework clearly reveals the parasitic, class-biased, and systemic character of the Bush administration's unilateralism. Along the way, Hossein-zadeh provides a challenging analysis of the cyclical fluctuations of U.S. military spending since World War II.' - Paul Burkett, Professor of Economics, Indiana State University

'This is an interesting and timely book...a fine mixture of analysis and detailed research, as well as being an entertaining read.' - Lobster


We guarantee the condition of every book as it's described on the Abebooks web
sites. If you're dissatisfied with your purchase (Incorrect Book/Not as
Described/Damaged) or if the order hasn't arrived, you're eligible for a refund
within 30 days of the estimated delivery date. If you've changed your mind about a
book that you've ordered, please use the Ask bookseller a question link to contact
us and we'll respond within 2 business days.