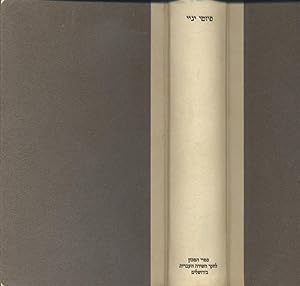 Vellum spine. 8vo. XXII, 438 pages. 21 cm. First edition. In Hebrew. Added English title page: Piyyute Yannai; Liturgical poems of Yannai, collected from Geniza-manuscripts and other sources and published by Menahem Zulay. Publications of the Research Institute for Hebrew Poetry; Series 3; Vol. 2. Vellum spine with black lettering, dark grey paper covered boards. "Yannai, liturgical poet, one of the principal representatives of the old Palestinian piyyut. Yannai's personality was brought into new light only in the 20th century with the discovery and publication of Cairo Genizah fragments. Many more texts by Yannai were identified by J. Schirmann in the large Genizah collections especially in Cambridge in 1931 and 1932. They were photographed for the Archives of the Berlin Institute for Research of Hebrew Poetry, together with thousands of other Genizah fragments. M. Zulay discovered many more unknown texts by Yannai among the fragments and collected all Yannai's works known to him, in a critical edition (1938) . Zulay, more than any other researcher, was interested in Yannai, and apart from important text editions, also conducted intensive research into Yannai's language. " (JE 2008) Menahem Zulay, (1901 1954) , was an "Israel researcher of early Erez Israel piyyut. Zulay, who was born in Oshcianci, Galicia, settled in Palestine in 1920. In 1925 he was invited to Germany to act as Hebrew tutor to the children of S. Z. Schocken. At the University of Bonn he was awarded a Ph. D. For his study Zur Liturgie der babylonischen Juden (1933) . He worked at the Schocken Institute for the Study of Hebrew poetry, from its foundation until his death. At the Institute, he studied thousands of photographs of the early Erez Israel piyyut, especially those of Yannai, that had been collected from all the libraries of the world in order to identify and classify them. He published a critical edition of Yannai, Piyyutei Yannai Melukkatim mi-Tokh Kitvei ha-Genizah u-Mekorot Aherim (1938) . " (JE 2008) Subjects: Piyutim. Clean and fresh. No jacket, as issued. Great condition. (SEF-46-33) Ef7, Heb3. (ja). N° de ref. de la librería 33012

Dan Wyman Books is the largest Jewish Antiquarian bookstore in New York, and a leading dealer worldwide. Please stop by when you are in town. Open by appointment most days, but closed on Jewish Holidays. Please visit our homepage at www.DanWymanBooks.com Please contact us with your needs or if you have books to sell. We consistently out-bid our competitors and we make housecalls to buy books!


Receive free of charge our monthly book list of unusual out-of-print Jewish,
titles in your e-mail box--days before they are posted on line. E-mail us for
details (no purchase necessary).

All titles are 100% returnable for any reason. U.S. Shipping is free. We accept
payment by check or major credit card (MC/VISA, AMEX, Discover), PayPal or Cash.
Please call or e-mail to hold an item. We reciprocate standard trade terms.