Artículos relacionados a The North American Journals of Prince Maximilian of... 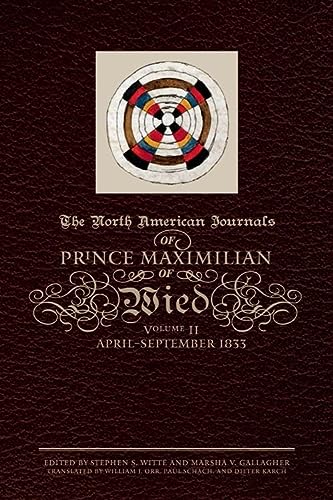 The North American Journals of Prince Maximilian of Wied, Vol. 2 (only)

Few historical chronicles are as informative and eloquent as the journal written by Prince Maximilian of Wied as a record of his journey into the North American interior in 1833, following the route Lewis and Clark had taken almost thirty years earlier. Maximilian's memorable descriptions of topography, Native peoples, and natural history were further brought to life through the now-familiar watercolors and sketches of Karl Bodmer, the young Swiss artist who accompanied him.

The first of the three volumes of the North American Journals recounts the prince's journey from Europe to St. Louis—then the edge of the frontier. Volume II vividly narrates his experiences on the upper Missouri and offers an unparalleled view of the region and the peoples native to it. In these pages, we accompany Maximilian as he travels far up the Missouri River to Fort McKenzie, a trading post some 2,500 river miles from St. Louis near what is now Fort Benton, Montana. The handsome, oversize volume not only reproduces this historic document but also features every one of Maximilian's illustrations—more than 200 in all, including nearly 50 in color—from the original journal now housed at Joslyn Art Museum in Omaha, Nebraska.

Maximilian recorded detailed observations of flora, fauna, geology, and climate. From his unique, scientifically trained perspective, he also undertook a serious field study of the cultures and languages of the central and northern Great Plains Indians he encountered. His journal contains important, firsthand descriptions of tribal social customs, religious rituals, material culture, and art, as well as an account of Native interactions with Euro-Americans engaged in the then-burgeoning fur trade.

This book is published with the assistance of the National Historical Publications and Records Commission.