Artículos relacionados a The Meaning of Night 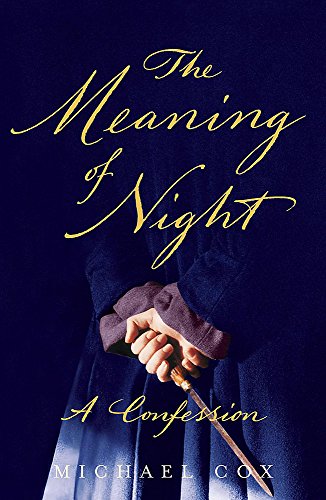 The Meaning of Night

UK, John Murray, 2006. Hardback with DJ. First edition/first printing (1 on copyright page). SIGNED by the author to the half title page. Very fine/very fine. Unread and like new. DJ unclipped and protected in a removable plastic sleeve. Shortlisted for the 2006 Costa Book Awards. The author's first novel, 30 years in the writing, is a stunning achievement. Set in Victorian England, it is the extraordinary story of Edward Glyver, book lover, scholar and murderer. Dispatched well protected and securely packed in bubblewrap and a strong cardboard book box. (S4). N° de ref. de la librería 1014A39887130-3HCR-FMAA

Título: The Meaning of Night

'It has been hard to ignore the proliferation of pseudo-Victorian novels following the success of Sarah Waters. Many have been of indifferent quality, but Michael Cox's debut is an excellent addition to the genre. It is a tale of obsession, love and revenge, played out amid London's swirling smog ... Glyver is an outstanding creation ... Cox lovingly recreates the atmosphere of the period, from grand dinner parties to assignation with ladies of the night ... Yet he never allows period detail to swamp the human drama at the novel's heart' -- Daily Mail 'Murray will present its biggest marketing and publicity campaign for what it calls "the most extraordinary novel of 2006"' -- Publishing News 20060519 'The novel has many attractions including its nicely twisted narrator and some of that gothic mystery appeal that helped to make The Shadow of the Wind such a hit.' -- The Bookseller, Benedicte Page, Ones to watch 20060602 'An absolute treat from start to finish.' -- The Bookseller: Rodney Troubridge 20060512 'Cox evokes the Victorian era effortlessly.' -- The Bookseller: Liz Taylor 20060512 'Spellbinding Victorian mystery ...Dark atmospheric storytelling with wicked twists and turns' -- Good Housekeeping 20060512 'An enthralling journey into the depths of Victorian London and the psyche of a man obsessed, Michael Cox's The Meaning of Night will have you hooked from [the] stunning opening line to the thrilling final revelation' -- InStyle 20060512 'Cox creates a strong sense of place, a complex narrative full of unexpectedly wicked twists, and a well-drawn cast of supporting characters. His language is mesmerizing, and his themes of betrayal, revenge, social stratification, sexual repression, and moral hypocrisy echo those of the great 19th-century novelists. Written in the tradition of Michel Faber's The Crimson Petal and the White and Sarah Waters's Fingersmith, Cox's masterpiece is highly recommended for all fiction collections' -- Library Journal 20060701 'Resonant with echoes of Wilkie Collins and Charles Dickens, Cox's richly imagined thriller features an unreliable narrator, Edward Glyver, who opens his chilling 'confession'; with a cold-blooded account of an anonymous murder that he commits one night on the streets of l854 London...Cox's tale abounds with startling surprises that are made credible by its scrupulously researched background and details of everyday Victorian life. Its exemplary blend of intrigue, history and romance mark a stand-out literary debut' -- Publishers Weekly 20060801 'A remarkably entertaining treat which begs comparison with the world of Patricia Highsmith' -- Kirkus 20061001 'The pages teem with wit and erudition and the plot thickens like a good minestrone soup ... Thrilling' -- Courier Mail 20060722 'A handsome slice of Victoriana... a rewarding, sinister yarn wrapped around an austere meditation on fate, faith and privilege' -- Hephzibah Anderson, Observer 20060722 'Worth staying up all night for... a gripping adventure story about a man's thirst for revenge... extraordinary because its literary influences are not only obvious, but integral. ... This is serious literary fan-fiction. Any adult who has secretly enjoyed Harry Potter will love this book' -- Melissa Katsoulis, The Times 20060722 'A novel of fate and free will, forensic detection and blind love, crime and its justifications. The atmosphere crackles, but beneath all is a sly sense of humour. The plotting is second to none -- a finely tuned yet extravagantly complex piece of clockwork' -- Evening Standard 20060722 'Like Charles Palliser, Michel Faber and Sarah Waters, Cox is making the Victorian era a switchback ride for the reader's mind... a rich and complicated tale ... a journey into darkness' -- Independent 20060722 'Impressively fluent first novel' -- Sunday Telegraph 20060722 'An unadulterated pleasure... In prose as flamboyant as a bespoke smoking jacket, Cox's metropolis comes to life, teeming with hearty whores and weasily clerks... Cox skilfully brings a modern sensibility to his 19th-century opus...Cox's epic is as thrilling as a Hansom cab chase and as guilty a pleasure as a nocturnal turn at a gentleman's "introducing house"' -- Independent on Sunday 20060722 'Exhilarating descriptions of the seamier side of Victorian London... True culture really does nourish' -- Guardian 20060722 'Page-turning' -- GQ 20060722 'A gripping page-turner for a dark winter evening' -- Good Book Guide 20060722 'A luxurious and engaging autumn read' -- thelondonpaper 20060722 'Next year's Booker Prize is no contest. If there is any justice the winner has just been published... It is beautifully written, brilliantly constructed and worth the $435,000 advance it commanded. Every penny' -- Writer's Forum 20060722 'Without a doubt a stunning achievement...In writing The Meaning of Night, Michael Cox has ensured that his name will soon become as household as Oxo' -- shotsmag.co.uk 20060722 'Thank goodness the man has perseverance -- not since Ian Pears and An Instance of the Fingerpost has historical-crime fiction been so well crafted, written and presented, with even the cover being worthy of mention' -- chrishigh.com 20060722 'Gripped from the start, you fly through the dazzling opening chapter, in thrall to the voice of Edward Glyver... Moral good expires on the rocks as the turning pages seem to accelerate. You are hooked' -- Scotland on Sunday 20060722 'Cox evocatively conjures the 'Great Leviathan' of Victorian London in nicely weighted prose ... a compelling story' -- Richard Godwin, Literary Review 20060722 'It has everything crucial to a literary thriller -- a gripping plot, a ruthless, ambitious rags-to-riches character and a whole conjured world of its own' -- Lauren Hadden, Image (Ireland) 20060722 'Unusual and remarkable... Key to the convincing nature of this confession is Cox's grasp of the minutiae of the times and the language of the period, so that the reader at times forgets this isn't a contemporary of Dickens...' -- South China Sunday Morning Post 20060722 'A brooding, sinister work. Bedecked in all the literary adornments of the period, it seeps with questions about the nature of good and evil, fate, inheritance, love and, above all, faith' -- Fiona Atherton, Scotsman 20060722


Please contact me before returning a book.
Returns are accepted within 30 days of despatch of item. A refund will be given
on
return of the book in original condition. Please note that the cost of return
postage will not be refunded.
If the book is returned because it is not as described or has been damaged in
the
post, a full refund will be given including the cost of return postage.


Orders usually ship within 2 business days. Shipping costs are based on books weighing 2.2 LB, or 1 KG. If your book order is heavy or oversized, we may contact you to let you know extra shipping is required. Please note that if Standard Shipping is chosen for book orders for countries outside Europe your order will be sent by Surface Mail and delivery could take up to 45 working days. Please choose Priority Shipping for airmail. International orders for pattern leaflets and booklets will be sent airmail as Standard and Airsure or International Signed For as Priority.