Artículos relacionados a The Making of Some Like It Hot: My Memories of Marilyn...

Portada Curtis, Tony The Making of Some Like It Hot: My Memories of Marilyn Monroe ...
Imagen del editor 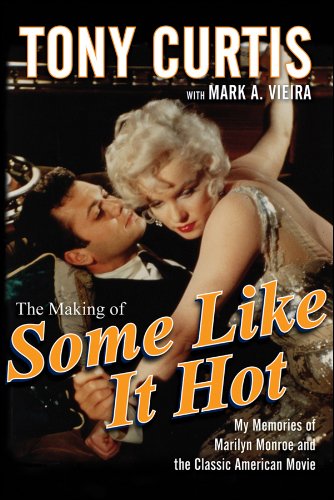 The Making of Some Like It Hot: My Memories of Marilyn Monroe and the Classic American Movie

Título: The Making of Some Like It Hot: My Memories ...

* ""Curtis's writing in this memoir of Billy Wilder's 1959 comic masterpiece is staccato, repetitive and occasionally baffling. But even if the voice is a little insane -- on Wilder: ""He was wiry. Energetic. I don't think I ever saw him stand still. Not a guy given to repose. Always moving. Like his pictures"" -- it suits the edgy, emotionally charged set of ""Some Like It Hot"" perfectly. There are sexual encounters with Marilyn Monroe, whom Curtis describes as his ""first adult relationship."" They slept together both before she was a major star and later, when they were working together on this film. It's left an open question whether Monroe was subsequently pregnant by Curtis or by her husband at the time, Arthur Miller. What is definite is that the racy seduction scene on the yacht in ""Some Like It Hot"" was Method acting at its finest. Speaking of the Method, Curtis suggests that Lee and Paula Strasberg were to blame for Monroe's neurotic behavior on the set and her failure to get there with any regularity. ""Before going to the Actors Studio she was like a tightrope walker who doesn't know there was a pit she could fall into,"" Curtis quotes Wilder as saying. ""After the Strasbergs got to her, she thought of nothing but the pit."" Sometimes Curtis's revelations about Monroe feel invasive (especially when it comes to her abortions and miscarriages) or borderline mean (were her hips really those of ""a Polish washerwoman""?). But to the extent that he could overcome his own dazzling narcissism, Curtis was clearly under her spell. His book (written with Mark A. Vieira) may be more feverish than fluent, but it's a wonderful tribute to one of the funniest movies ever made."" (The New York Times Book Review, December 6, 2009)

""Curtis gives us a personal, behind the scenes look at the trials and tribulations of Hollywood film making in the 1950's; it contains many additional humorous vignettes...."" (Examiner.com, 15 September 2009)