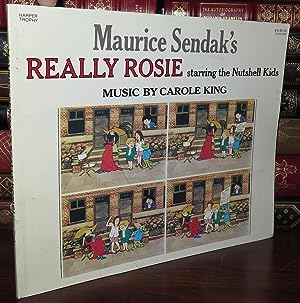 Descripción Harper & Row, New york, 1975. Paperback. Condición: Very Good+. Illustrated by Maurice Sendak Ilustrador. 1st Edition; 1st Printing. Color Illustrations; This edition is an oversized paperback. Spine ends & corners of book covers have a bit of very light bumping and rubbing. There is a bit of dirt / remnant of sticker glue to the top front corner of the book cover where a sticker appears to have been removed. This is a musical with scenario, lyrics, and pictures by Maurice Sendak and music by Carole King with design by Jane Byers Bierhorst. Text pages are clean & bright. Includes music and lyrics for the musical. Overall, a clean, bright copy. "It is early morning. Rosie appears at her window and begins to sing. Kathy, the Nutshell Kids, various mamas and papas, Jennie, and Buttermilk poke their heads out of their windows and listen." "Sendak produced an animated television production based on his work titled Really Rosie, featuring the voice of Carole King, which was broadcast in 1975 and is available on video (usually as part of video compilations of his work). An album of the songs was also produced.". Nº de ref. del artículo: A33334

Descripción Harper & Row, 1975. Softcover. Condición: Very Good. First Edition. Scenario, lyrics, and pictures by Maurice Sendak, music by Carole King and design by Jane Byers Bierhorst. This book Is based on the television program on the CBS network on February 19, 1975.; 11 in. x 9 in. tall; 64 pages. Nº de ref. del artículo: 500681

Descripción Harper and Row, New York, 1975. Paperback. Condición: Near fine. Maurice Sendak Ilustrador. First Edition. paperback, illustrated by Sendak. SIGNED by Sendak on the title page. Just a trace of wear to the corners and some modest soiling to the covers, still a lightly used near fine copy with clean contents and tight binding. No hardcover edition of this book is available. Nº de ref. del artículo: 941