Artículos relacionados a Literature and Film 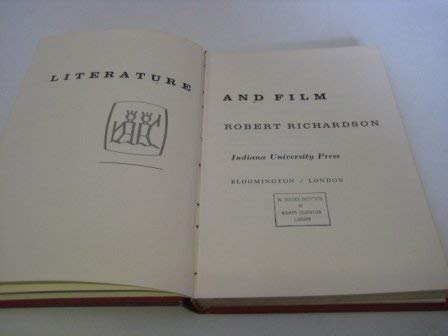 Dust Jacket Condition: Very Good -. ix, 148 (1) pp, prologue, 1. Literature and Film; 2. Literary Origins and Backgrounds of the Film; 3. Griffith and Eisenstein: The Uses of Literature in Film; 4. Literary Technique and Film Technique; 5. Verbal and Visual Languages; 6. Film and Modern Fiction; 7. The Question of Order and Coherence in Poetry and Film; 8. Waste Lands: The Breakdown of Order; 9. the Survival of Humanism; bibliography, notes, index. First Edition, 1969. "Beginning with the simple but possibly crucial observation that, in general, literature and film are storytelling arts, the author shows how a film consciousness sharpend the reader's alertness to the visual and aural qualities that mark much great writing, and literary training, in turn adds depth and perspective to appreciation of film. He goes on to present some of the literary influences that have significantly affected film since the era of D. W. Griffith, and he discusses film's major influences on modern literature. The author concludes with an extended exploration of the relationship of film to poetry, suggesting that while the two forms have been concerned with similar thematic material and make use of similar techniques, film has dealt more significantly with the question of how to find a humane, noncoercive order in life." from the jacket flap. Price clipped. Small chips along top edge spine dj with closed tear to top and bottom panel edges of same. Only the faintest edge wear with pages 93 & 95 creased at top corner, else, Pristine, no wear. Clean, tight and strong binding with no underlining, highlighting or marginalia. Black quarter-cloth with blind-stamped publisher's seal on front board, gilt lettering to spine, red top text block edge, and black endpapers. N° de ref. de la librería 002636

~Specializing in used and rare books since 1975~