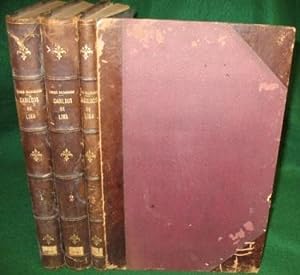 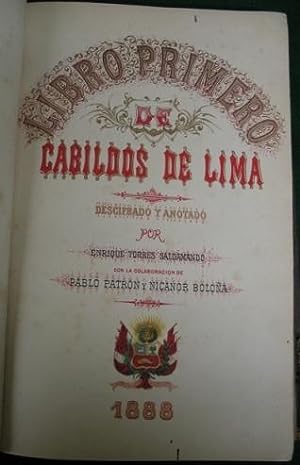 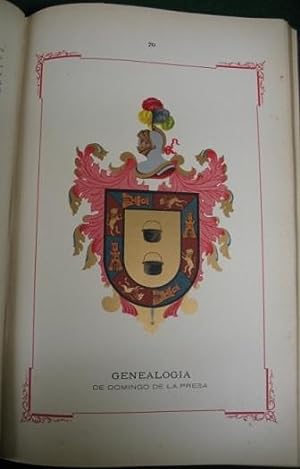 3 parts: xxviii+445 pages with engraved color title, portrait and facsimile plates of original documents. 426 pages with engraved colored coats of arms, facsimile manuscript productions, family trees, maps and appendices. 220 pages with tables and engraved coat of arms plates. Folio ()13 3/4" x 9") bound in half leather with gilt lettering to spine and four raised spine bands over burgundy pebbled boards. With collaboration by Pablo Patro and Nicanor Bolona. Signed by the author on the dedication page of volume one and the page following the Pizzaro plate of volume two. First edition. The Castilian cabildo has some similarities to the ancient Roman municipium and civitas especially in the use of plural administrative officers and its control of the surrounding countryside, the territorium, but its evolution is a uniquely medieval development. With the collapse of the Western Roman Empire and the establishment of the Visigothic Kingdom, the ancient municipal government disappeared. In many areas, seeking to escape from the political instability around them, people entrusted themselves to large landholders, exchanging their service for the landholder's protection, in a process that ultimately led to feudalism. In areas where the old territoria survived, the Visigothic kings appointed a single officer, called either a comes or a iudice to replace the defunct municipia or civitates. After the Muslim conquest, the new rulers also appointed various judicial officers to manage the affairs of the cities. Qadis heard any cases that fell under the purview of Sharia law and sahib oversaw the administration of the various other areas of urban life, such as the markets and the public order. The cabildo proper began its slow evolution in the process of the Reconquista. As fortified areas grew into urban centers or older cities were incorporated into the expanding Christian kingdoms of Portugal, Leon and Castile, kings (and sometimes local lords) granted the cities various levels of self-rule and unique sets of laws (the fueros) and made them the administrative center of a large teminus or alfoz, which was analogous to the ancient territorium. In general, municipal governments often consisted of a council (consejo) open to all the property-owning adult males of the city and a nobleman appointed to represent the king and organize the defense of the city and terminus. By the 13th century, these open councils proved unwieldy and were replaced by a smaller body, the cabildo or ayuntamiento consisting of set number of regidores (usually twenty-four in the largest cities) elected by the property owners in the city. These new bodies took their permanent form by the end of the 14th century. As part of the same process, a municipal council (the consell) with different attributes and composition also evolved in the neighboring Kingdom of Aragon during this period. In theory, every municipality in the Spanish colonies in the Americas and Philippines had a cabildo. Municipalities were not just the cities but included the surrounding lands. All lands were ultimately assigned to a municipality. Usually the cabildo made local laws and reported to the presidente (president) of the audiencia, who in turn reported to the viceroy. The cabildo had judicial, legislative and administrative duties. For this reason it was often addressed with the formula, Consejo, Justicia y Regimiento (Council, Justice and Government). The cabildo consisted of several types of officials. There were four to twelve regidores, depending on the size and importance of the municipality. Regidores, were not just deliberative officers, but all shared in the administration of the territory, dividing tasks among themselves. Initially the regidores were elected by all the heads of household. In the late Middle Ages, these elections often turn violent, with citizens forming bands to control elections and even resorting to murder. To minimize this kings began to appoint a certain number of, or. N° de ref. de la librería CA0234