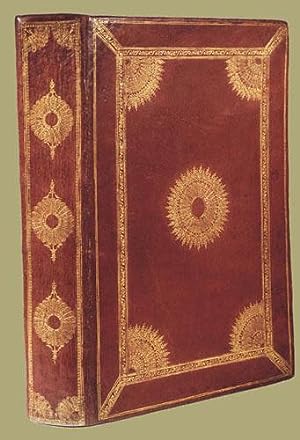 Imperial folio, [432 x 302 mm.], (20), 299, (1) ff., 2 blanks, (5) ff., 1 blank (including Sarmatian supplement (quire 55) misbound at end). Text in 2 columns, 64 lines, in a rotunda type expressly designed for it. 1809 woodcut illustrations from 645 blocks, of which 31 are double-page; spaces left blank for larger initials. Bound in 17th-century red gold-tooled goatskin (Venetian?), sides panelled and with fan ornament at center and corners, flat spine similarly decorated, gilt edges; repairs at spine and corners, small wormholes at bottom edge of boards; some minor rubbing. Ownership inscription of W.A. Foyle on front end pastedown. Handwritten Latin title-page inserted before printed xylographic title, illegible annotation on title. Discrete mend on t-p; minor repairs to several leaves at margin and gutter; small stain in world map; light dampstain, heavier towards end, some browning, fingersoiling and occasional spotting throughout. Generally a large and very attractive copy. First edition and an outstanding copy of the first illustrated encyclopedia published at the dawn of the discovery period. As a comprehensive contemporary picture of geographical and historical knowledge, the "Nuremberg Chronicle" as it is called, offers nothing less than a history of the world, and, in its own fashion, expanded the barriers of local cities and states just as the transatlantic voyages expanded the boundaries of the world. As a representative picture of 15th- century geographical and historical knowledge, the work is unsurpassed among incunables, in which books of a religious and liturgical nature predominate. A milestone in the history of printing as well, it contains more illustrations than had ever appeared in a printed book, and as a technical challenge of incunable book production, was superseded only by the first printed book, Gutenberg s Bible, also published in Nuremberg. The magnificent woodcut views (of which 31 are double-page) are in most cases the first printed views of the cities and towns they depict, and offer a representative view of how 15th- century readers pictured places they would most likely never visit. Many, such as the important double-page view of Jerusalem, were based on the most up-to-date reports of travellers (usually merchants). The colophon credits the artists Michael Wolgemut and Wilhelm Pleydenwurff for their contribution, a detail with fascinating implication, since Albrecht Dürer was at this time an apprentice in their workshop. The work s author, Hartmann Schedel (1440-1514) was a physician and an important humanist and book collector, whose outstanding library provided much of the research materials for the work. (Schedel s private library is "today among the most precious collections of the Bayerische Staatsbibliothek in Munich, Germany".) The original publisher s contract for the work is extant, providing a revealing window on the complicated production of this enormous project (see further A. Wilson, The Making of the Nuremberg Chronicle). A German edition followed later the same year. *Goff S-307; Hain Copinger 14508; BMC II.437; Schreiber 5203; Adrian Wilson, The Making of the Nuremberg Chronicle (1976). N° de ref. de la librería 2551

Descripción Pranava Books, 2020. Leatherbound. Condición: NEW. Leatherbound edition. Condition: New. Leather Binding on Spine and Corners with Golden leaf printing on spine. Reprinted from 1497 edition. NO changes have been made to the original text. This is NOT a retyped or an ocr'd reprint. Illustrations, Index, if any, are included in black and white. Each page is checked manually before printing. As this print on demand book is reprinted from a very old book, there could be some missing or flawed pages, but we always try to make the book as complete as possible. Fold-outs, if any, are not part of the book. If the original book was published in multiple volumes then this reprint is of only one volume, not the whole set. IF YOU WISH TO ORDER PARTICULAR VOLUME OR ALL THE VOLUMES YOU CAN CONTACT US. Sewing binding for longer life, where the book block is actually sewn (smythe sewn/section sewn) with thread before binding which results in a more durable type of binding. THERE MIGHT BE DELAY THAN THE ESTIMATED DELIVERY DATE DUE TO COVID-19. Pages: 817 Pages: 817. Nº de ref. del artículo: LB990005000574