Artículos relacionados a Letters from Aubrey Beardsley to Leonard Smithers.... 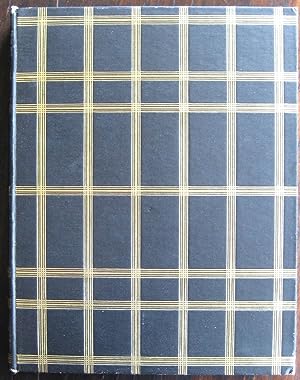 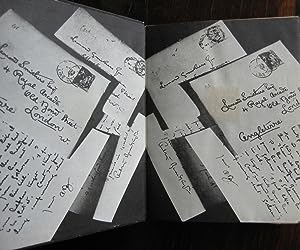 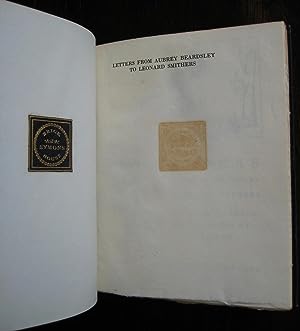 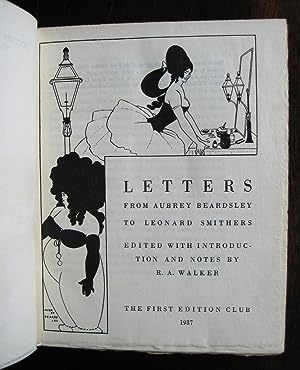 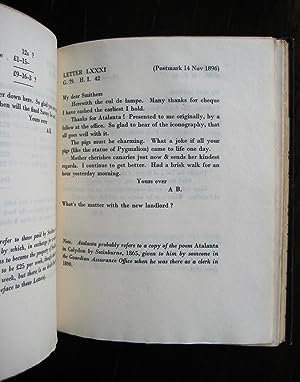 Letters from Aubrey Beardsley to Leonard Smithers. Edited with introduction and notes by R.A. Walker

Black cloth, gilt. From the library of the founder of the First Edition Club, A.J.A. Symons, with his grand Brick House leather book-label (Ramsden's bookplate no. 6); some impressive offsetting on to the half-title. "This is the twenty-fourth publication of the First Edition Club. It has been printed by the CHISWICK PRESS, NEW NORTHGATE, LONDON, in Monotype Bodoni on Arnold & Foster's Indian Toned Laid Hand Made Paper. The binding has been executed by the Leighton-Straker Bookbinding Co . . . The design used for the title page reproduces a drawing by Aubrey Beardsley never before published." One hundred and eighty-six letters from the artist Aubrey Beardsley to his rascally publisher, July 1895-March 1898, from shortly before he was sacked from The Yellow Book to his anguished last days ("Jesus is our Lord & Judge Dear Friend I implore you to destroy all copies of Lysistrata & bad drawings . . . By all that is holy all obscene drawings"). Leonard "Len" Smithers, the dentist's son from Yorkshire who came to London to pursue a career as a bookseller and pornographer, had a meteoric career: the celebrated publisher of the Nineties "decadents" turned to forgery after the death, aged 25, of his finest artist and died in pathetic penury on his 46th birthday. At his grandest, the founder of the Erotika Biblion Society held court at 6A Bedford Square. At his grandest A.J.A. Symons, the founder and Secretary of the First Edition Club, presided across the square at no. 17, in premises opened in May 1928 (wrote George Sims) "in truly regal fashion by one of the few royal bibliophiles, ex-King Manoel of Portugal". Like Smithers, Symons crashed; and was forced to put up his library for sale - including some priceless Beardsley items. His prize piece, featured on the front of Elkin Mathews's 1932 catalogue of his books, was an original pen-and-ink drawing by Beardsley for a book catalogue by Leonard Smithers. The First Edition Club resumed on a more frugal basis, in Little Russell Street, but Symons spent more and more time in Essex, at his beloved Brick House in Finchingfield, and produced the club's last book, Letters to Leonard Smithers, four years before his early death - falling short by five years even of Smithers's life-span. "The Letters to Smithers seem to me a very fine piece of book production," wrote A.J.A. Symons's brother and biographer Julian Symons, "but . . . the book was much disliked by the letters' editor R.A. Walker. In several increasingly abusive letters he complained that the production was vulgar, and totally out of key with the spirit of Beardsley and the Nineties." Rainforth Armitage Walker (alias Georges Derry), a judicious editor, is impressively merciful to Smithers. His letters to Symons are now in Princeton University Library; Beardsley's to Smithers, once in the possession of Maggs Bros, went to the Henry E. Huntington Library, in San Marino, California. Julian Symons's own copy of Walker's edition - inscribed to him by A.J.A. Symons, "Julian from A.J. Christmas 1937 in black, white and calligraphy" - was offered in Maggs Bros, catalogue 1216 (1996), for Ł425. Lasner 184. N° de ref. de la librería TR100018


Any book may be returned within 30 days of receipt if not found as described. James Fergusson Books & Manuscripts is in private premises at 39 Melrose Gardens, London W6 7RN. James Fergusson is delighted to receive enquiries by telephone, + 44 (0)20 7602 3536, or e-mail, jamesfergusson [at] btinternet [dot] com.