Artículos relacionados a Lectures on Physiology, Zoology, and the Natural History...

Portada LAWRENCE, W[illiam]. Lectures on Physiology, Zoology, and the Natural History of Man,... 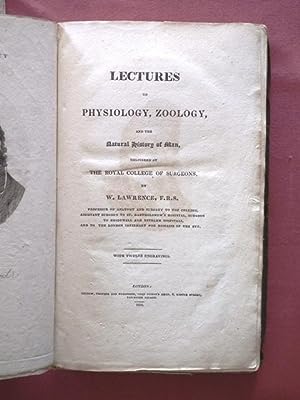 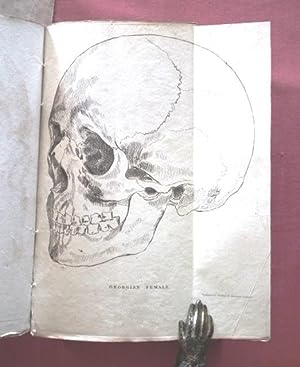 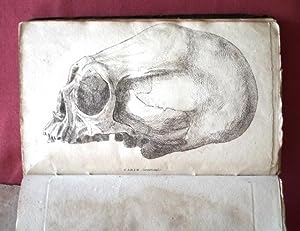 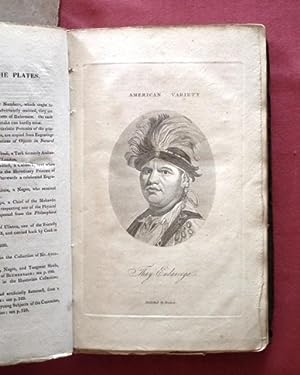 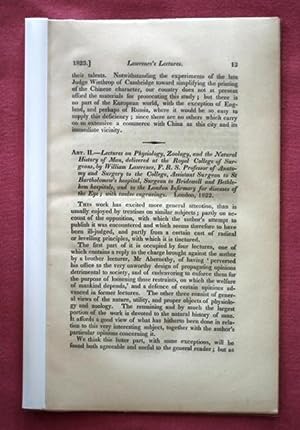 Lectures on Physiology, Zoology, and the Natural History of Man, Delivered at the Royal College of Surgeons. TOGETHER WITH : North American Review, New Series, no. 15, July 1823 : ANON. A Review of the 1822 edition of Lectures. Pp. 13-32. Complete and extracted from the Journal.

pp. vi, (v)-xi, (i) Explanation of the Plates, 500. Frontispiece and 11 plates [5 aquatints, 7 engraved and folding, all with the Benbow imprint]. Original cloth-backed boards, lower corners of the boards repaired, rebacked, occasional discoloured margin, the multi-folding plates somewhat foxed, creased at the edges and one is torn at the attachment without loss, entirely uncut, overall a good copy. *William Lawrence first delivered these Lectures at the Royal College of Surgeons in 1817, and was roundly attacked by his mentor, Abernethy, in his publication 'Physiological Lectures.'. Lawrence declared at the start of the above Lectures that had Abernethy's charges been restricted to the lecture theatre, he would have been content to refute them there but as they had been subsequently offered in print, he felt obliged to do the same. The charge accused Lawrence of perverting '. the honourable office, intrusted to [him] by this Court, to the very unworthy design of propagating opinions detrimental to society, and of endeavouring to enforce them for the purpose of loosening those restraints, on which the welfare of mankind depends.' Given Lawrence's conclusions and the political context in which they were uttered, Abernethy's accusation, coming from the heart of the establishment, was not at all surprising. Lawrence had stated that all physical, moral and mental differences in man were inherited, that the races of man had arisen by mutation, that sexual selection had improved the beauty of 'advanced' races and the governing classes, that what we now think of as genetic isolation had acted to preserve racial characters by establishing breeding barriers, that differences between races of man can never be due to differences in external conditions such as food, climate or government, that, just as domestic animals were improved by selective breeding, so could improvements or conversely deleterious effects, be transmitted in man, as evidenced in many royal families and aristocracies - and, finally, that only by objective study, such as zoological, could the treatment of man as an animal amongst animals, provide the proper foundation for teaching and research in medicine, in morals, and in politics. Delivered at a time when the reverberations of the French Revolution were still in evidence, it is not surprising that there should be a reaction. The Church and the Universities which they controlled were horrified - radical opinion, however, was delighted and the more outrageous individuals gave the most irreverent responses. Thomas Love Peacock, the novelist, bought a barontecy for an Orang-Utan. There was a rush to publish anti-Lawrence tracts and of course, opportunist publishers like Benbow and Smith capitalised on public interest by pirating the original Callow imprint. Lawrence obtained an injunction against Smith for publishing without consent but in the subsequent Chancery Court case, it was found against him, in that the publication denied Christianity and Revelation, contrary to public policy and morality. He had thus forfeited copyright in the work and the piracy was upheld. The outcry against Lawrence was such as to force him to consider his position and his future. He faced possible prosecution, certain persecution and probable ruin - he therefore retracted and suppressed the book, survived the crisis and in later years became President of the Royal College of Surgeons, Sergeant-Surgeon to Queen Victoria and, before he died in 1867, a baronet. Therein lies a message . shortly before he died, he warned Huxley not to publish anything on the evolution of man, but, of course, the atmosphere had changed totally since his early days. Even today, however, Lawrence scarcely rates a mention in Darwinian commentaries. Only C. D. DARLINGTON in Darwin's Place in History, 1959, seems to have been prepared to spend time on him and he notes drily that Lawrence made three mistakes - he acknowledged the work of his predecessors, he based his views on man and pointed out the implications for the social politics of his time. Regarding the first point, Darlington points out the indebtedness of Patrick Mathew to Lawrence - '. in an appendix to a work on the growth of timber for warships, Mathew, in a few brilliant pages irrelevant to his main theme, had expounded a complete theory of evolution. In the same book he had also introduced a few equally irrelevant but equally illuminating views on the evolution of race and class in man and the decay of aristocracies. These opinions as a whole are related to only one source, to the conclusions which Lawrence had derived by close reasoning from the evidence.'. N° de ref. de la librería 61177

Título: Lectures on Physiology, Zoology, and the ...


CONDITIONS OF SALE: Books are offered subject to availability.
Payment is expected with order though all items
are sent on approval and may be returned for any reason within 3 days
of receipt. Return packing should be as secure as when despatched
by us. Parcels are sent at the most appropriate rate,
unless otherwise instructed; postage and insurance charged extra.
MOST MAJOR CREDIT CARDS ACCEPTED, CHEQUES, BACS AND WIRE TRANSFERS.