Artículos relacionados a Kinesis: The Ancient Depiction of Gesture, Motion,... 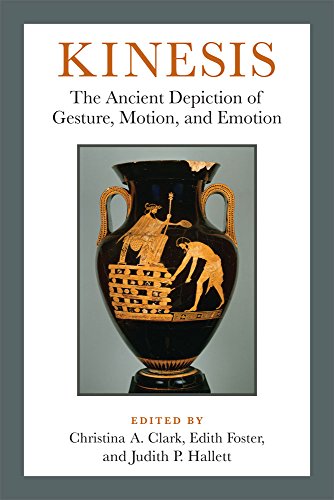 Kinesis: The Ancient Depiction of Gesture, Motion, and Emotion

Kinesis: The Ancient Depiction of Gesture, Motion, and Emotion analyzes the depiction of emotions, gestures, and nonverbal behaviors in ancient Greek and Roman texts, and considers the precise language depicting them. Individual contributors examine genres ranging from historiography and epic to tragedy, philosophy, and vase decoration. They explore evidence as disparate as Pliny's depiction of animal emotions, Plato's presentation of Aristophanes' hiccups, and Thucydides' use of verb tenses. Sophocles' deployment of silence is considered, as are Lucan's depiction of death and the speaking objects of the medieval Alexander Romance. Ancient authors' depictions of emotion, gesture, and nonverbal behavior are intrinsically relevant to psychological, social, and anthropological studies of the ancient world, and are perhaps even more important to those who study the texts themselves and try to understand them. The volume will be relevant to scholars studying Greek and Roman society and literature, as well as to those who study the imitation of ancient literature in later societies. Since jargon is avoided and all passages in ancient languages are translated, the volume will be suitable for students from the upper undergraduate level. Contributors in addition to the volume editors include Jeffrey Rusten,Rosaria Vignolo Munson, Hans-Peter Stahl, Carolyn Dewald, Rachel Kitzinger, Deborah Boedeker, Daniel P. Tompkins, John Marincola, Carolin Hahnemann, Ellen Finkelpearl, Hanna M. Roisman, Eliot Wirshbo, James V. Morrison, Bruce Heiden, Daniel B. Levine, and Brad L. Cook.