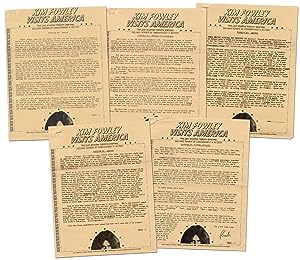 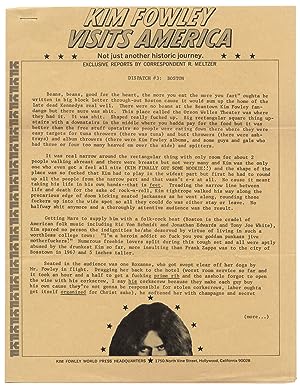 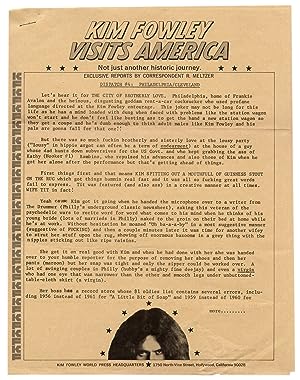 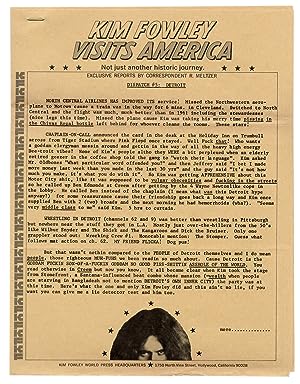 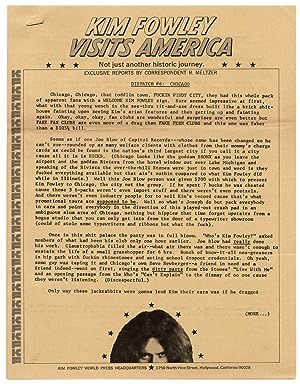 Five issues (of eight issued?) as follows: Dispatch #3: Boston, 2pp. (two leaves printed rectos only); Dispatch #4: Philadelphia/Cleveland, 3pp. (two leaves printed rectos and one verso); Dispatch #5: Detroit, 3pp. (two leaves printed rectos and 1 verso); Dispatch #6: Chicago, 3pp. (two leaves printed rectos and 1 verso); Dispatch #8: Meltzer Reflects, [3]pp. (two leaves, printed rectos and 1 verso), photographs, facsimile of manuscript. Old folds, a couple of tiny nicks, near fine. A fascinating archive of press releases by one of the earliest rock critics, Richard Meltzer, apparently created by him for the producer, performer, hipster, (self-)promoter, and svengali, Kim Fowley. Fowley had and continues to have a colorful career in the music industry, beginning in 1959; he currently has a radio show on Sirius radio's Underground Garage station. Aside from working with Frank Zappa, Paul Revere and the Raiders, Gene Vincent, KISS, The Modern Lovers and many other, he is probably best known for his role in the formation and promotion of the Joan Jett and Cheri Currie-led band The Runaways. In the 2010 film *The Runaways* he is played by Michael Shannon in suitably manic fashion. *OCLC* locates no copies of the original issues, although excerpts appear in one of Meltzer's anthologies of criticism: *A Whore Just Like the Rest: The Music Writings of Richard Meltzer.* The dispatches document Fowley's wild, gonzo-esque, and occasionally X-rated progress as he traverses the U.S. at various rock venues, parties, and radio stations, apparently in the employment of Capitol Records. The final page of Dispatch #8 is a facsimile of a manuscript of a declaration of women's rights, apparently bemoaning the fact that there isn't enough good pornography for women and that "any men who derives pleasure from the abuse and degradation of women deserves anything and everything that the Women's Movement may do to him! Otherwise, hail Capitol Records." Meltzer also suggests that women have their way with Fowley and Meltzer, allow them no pleasure, and then castrate them, although his sincerity may be in some doubt on this point. Meltzer started his career in 1967 writing for *Crawdaddy*, and has published several books of criticism, as well as performed with the punk band VOM. Rare. N░ de ref. de la librerÝa 365500