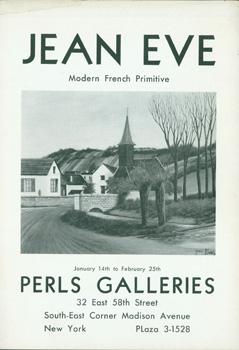 8vo., Printed Wrappers, Very Good, Illustrations. [4 pp.].The Perls Gallery in New York was founded in 1937 by Klaus Gunther Perls (1912-2008) and his brother, Franz R. Perls,(1910-1975), after having worked at their mother's Galerie Kate Perls in Paris. Following his marriage to Amelia Blumenthal of Philadelphia in 1940 , Klaus and Amelia B. Perls jointly ran the gallery. They specialized in modern French painting while Franz established the Frank Perls Gallery in Beverly Hills He originally dealt in works by Maurice Utrillo, Maurice de Vlaminck and Raoul Dufy that his mother sent from Paris, until the Nazi occupation. When she was forced to flee France, he began dealing in now little known contemporary American artists, including Darrel Austin, and in Mexican and South American art such as Mario Carreno. After the war, Klaus again dealt in French art from the School of ParisArtists in the Perls' stable included Rouault, Picasso, Léger, Derain, Dufy, Matisse, Modigliani, Pascin, Soutine and Vlaminck. The Perls Galleries closed in 1997. N° de ref. de la librería 15-8076

We deal in antiquarian books, prints, posters, paintings and other art related material. We are also a publisher and distributer of art reference books, primarily catalogues raisonnés. We are related to Alan Wofsy Fine Arts and Dow & Frosini. Look for us at www.art-books.com