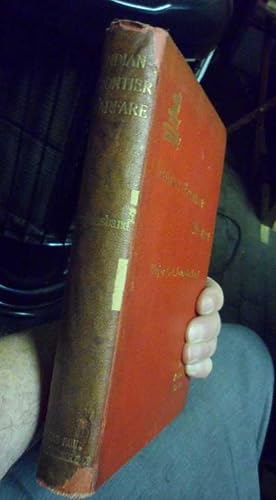 This 254 page Indian Study, being an increasingly well respected and energetically applauded offering it is proudly presented with great and well deserved hubris by Hirschfeld Galleries in the publishers original binding. Said binding being Original red cloth, title gilt to spine and upper board, black surface-paper endpapers. Binding solid, rather clean and tight, save for substantial sun-darkening to spine which seems to have made it brittle and as a result ther are 4 or 5 half toenail sized chips missing from the top layer. But the hinges uncracked, and the text-block sound clean and sound, a perfectly workable copy. 7 maps, one of them colored, 5 of them folding, 2 of these in an end-pocket. Far from common analysis of Indian frontier warfare "as it is exemplified by campaigns and expeditions which have taken place in the last twenty years." Younghusband had considerable experience having served in the Second Afghan War; the Sudan, 1885-6; Third Burma War 1886-7; and relief of Chitral 1895. Part of the excellent Wolseley Series. This book has the four absolute uppermost qualities we at Hirschfeld Galleries since 1931 have always sought in books: 1) excellence in content, 2) literary quality, 3) appealing design, and 4) significance of contribution. Another great altruistic offering opportunity for us and an even greater opportunity for self-actualized reception on your part. But enough of the lugubrious however allegorically wise jaw-jacking, enough said of the telluric parameters of select Hirschfeld Galleries' offerings such as this one which take on a life of their own and speak so very loudly for themselves. Read to learn and enjoy; go forth to share and enjoin. Size: 8vo - over 7¾" - 9¾" tall. N° de ref. de la librería 006423

Descripción SB xvi+254pp, with 7 maps 2019 N&MP Reprint of 1898 Original EditionPublished Price Â£18.99 Originally published in 1898 as part of the respected Wolseley Series of military textbooks, and dealing with campaigns and expeditions that took place during the 20 years that preceded publication, a period that saw the invention of the breechloader and the extensive introduction of railways, both of which materially altered the conditions under which Indian campaigns were undertaken.With chapters covering mountain, forest and defensive warfare, minor operations, convoys, mountain artillery, cavalry, engineers and signalling.YounghusbandÂ served in several conflicts, including the Second Afghan War, the Mahdist War, the Third Burmese War, the Second Boer War and finally in the First World War. Due to wounds received on the battlefield, he was forced to retire from the army in 1917. Nº de ref. del artículo: 27330

5. Indian Frontier Warfare: The Military Methods of the British Empire on the Sub-Continent 1878-1900

6. Indian Frontier Warfare: the Military Methods of the British Empire on the Sub-Continent 1878-1900

7. Indian Frontier Warfare: The Military Methods of the British Empire on the Sub-Continent 1878-1900

Descripción Kegan Paul, Trench, Trubner & Co, 1898. Unknown Binding. Condición: Acceptable. A well used ex-library book with usual stamps and stickers. The red cover has gilt detail. There is some shelf wear with slight loss at upper spine. Cracks at the endpaper and clear taped repair at the half title page. Pages untrimmed. The two fold out maps in a pocket at the rear have small splits at the folds. However this remains a lovely and fascinating book. Acceptable: a readable copy. All pages and the cover are intact (dust cover may be missing). Pages can include considerable notes--in pen or highlighter--but notes cannot obscure the text. Most items will be dispatched the same or the next working day. Nº de ref. del artículo: mon0012462901