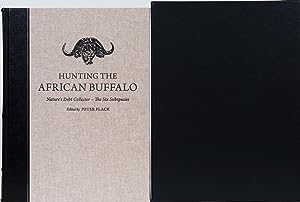 HERE NOW-EVERYTHING YOU EVER WANTED TO KNOW ABOUT HUNTING THE AFRICAN BUFFALO By Peter Flack (Limited edition) You can argue about which animal is the most dangerous, most glamorous, rarest, etc. But what you cannot argue about is the fact the African Cape buffalo hunting is perhaps the favorite dangerous big game animal among hunters, and the other African buffalo species are popular to hunt as well. Now, well known hunter/author Peter Flack has brought together everything there is to know about hunting the African buffalo (all subspecies). In this monumental work, 480-pages, 700+ color & b/w pictures, articles from the hunters of yesteryear as well as the top professional and amateur hunters of today. There are even chapters on guns and clothing. Of the 30 articles by today's top professionals 28 have been written especially for this book. The Who's who of this author contributor list includes: Robin Hurt, Don Cowie, Rudy Lubin, Jeff Rann, John Oosthuizen, Jason Roussos and more. Well known hunters from earlier times include Selous, Taylor, Findlay, Christy, Temple-Perkins, Kirby. By having articles from past and present times, the reader can see how things have changed, or how they have remained the same. This is bound to become an instant classic. Peter Flack needs no introduction. All of his limited edition books have been sellouts and his recently produced works on the spiral horned antelopes are no exception. Trade editions of his works are also nicely designed, well produced and garner much praise. We suspect before long they too will be available only on the secondary market. Large format- extra postage. 300 copies bound in quarter leather. Numbered/signed by the author and slipcased. $ 225.00. We have a limited number of copies please order early. Your credit card will not be charged until the books have arrived and are ready to ship. N° de ref. de la librería 4468