Artículos relacionados a H IS FOR HOMICIDE Signed 1st 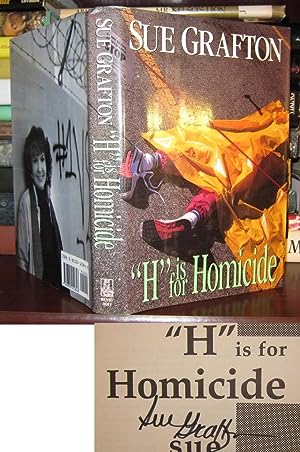 H IS FOR HOMICIDE Signed 1st

"Intelligent, fast-paced, and filled with memorable characters...Kinsey remains as engaging as ever." --The New York Times Book Review

"Millhone is an engaging detective-for-hire...P.I. Kinsey Millhone and her creator...are arguably the best of [the] distaff invaders of the hitherto sacrosanct turf of gumshoes." --The Buffalo News

"Once a fan reads one of Grafton's alphabetically titled detective novels, he or she will not rest until all the others are found." --Los Angeles Herald Examiner

"Tough but compassionate...There is no one better than Kinsey Millhone." --Best Sellers

"A woman we feel we know, a tough cookie with a soft center, a gregarious loner." --Newsweek

"Lord, how I like this Kinsey Millhone...The best detective fiction I have read in years." --The New York Times Book Review

"Smart, tough, and thorough...Kinsey Millhone is a pleasure." --The Bloomsbury Review

"Kinsey is one of the most persuasive of the new female operatives...She's refreshingly free of gender clichés. Grafton, who is a very witty writer, has also given her sleuth a nice sense of humor--and a set of Wonder Woman sheets to prove it." --Boston Herald

"What grandpa used to call a class act." --Stanley Ellin

"Kinsey's got brains and a sense of humor." --Kirkus Reviews