Artículos relacionados a OFF WITH THEIR HEADS Signed 1st 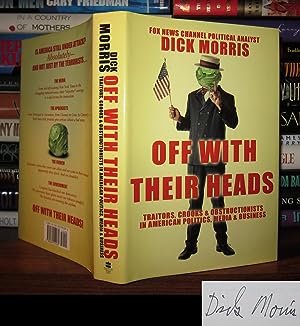 OFF WITH THEIR HEADS Signed 1st

Título: OFF WITH THEIR HEADS Signed 1st

What happened to the unity that so blessed America after 9/11? Where did our sense of determination go?

Our political, journalistic, and cultural leaders have mounted a campaign to oppose and impede the war on terror that seemed so vital in that rare moment of clarity. This book is my personal cri du coeur about deception in politics, journalism, and business -- especially when it stops us from following through on the work 9/11 has left for us all to do.

This book takes on some pretty sacred cows, but it's about time they became fair game.

Are you appalled by the antiwar tone the news media has taken since the war on terror began -- especially "objective" news outlets like the New York Times and the network news?

Are you wondering when liberal celebrities like Barbara Streisand, Sean Penn, and Susan Sarandon suddenly became geopolitical oracles whose advice we're supposed to value above the wisdom of tenured experts?

Are you at a loss to decide who has betrayed us more outrageously: the French who abandoned us in our time of need, or our own elected officials, who tapped our 401(k) savings and the tobacco-settlement windfall with equal abandon?

In Off with Their Heads, syndicated columnist and Fox News Cannel political analyst Dick Morris points an accusing finger at the many ways the public has been lied to and misled, pickpocketed and endangered. Whether it's Bill Clinton, who ignored mounting evidence of impending terrorist catastrophe throughout the 1990s, or the members of Congress, who quietly sold our democracy down the river in exchange for lifetime incumbency, Morris rips the cover off the cowardly and duplicitous figures who have sacrificed America's interests for their own.

From private corruption to public treachery, even longtime political buffs will marvel at the astonishing behavior Morris reveals at every level of society -- and at how it threatens to compromise the American way of life.