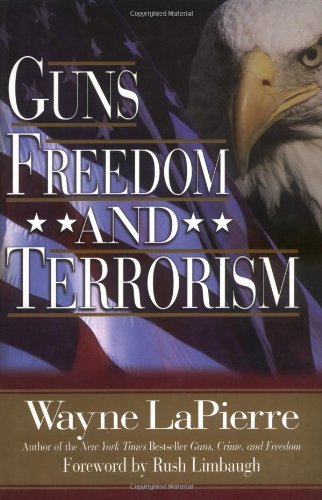 Inscribed with date by LaPierre to previous owner with words "Thanks for supporting our 2nd Amendment. It's our First Freedom!." Also has LaPierre's business card. Number line starts with 2. Dust jacket not price-clipped, price is printed on back by ISBN number. It appears a hot cup or glass was placed on dj at top as it is wavy. Stain inside dj but almost new condition except for that. Some dust staining to top and side of page block. No other marks, writing or bookplate. Not a remainder or ex-library. N° de ref. de la librería 003254

Gun control has long been a hot topic in the United States, and the controversy has only heightened since the terrorist attacks on September 11, 2001. Now, with a growing focus on homeland security, more and more Americans are asserting their Second Amendment right to bear arms.

In Guns, Freedom, and Terrorism, NRA executive vice president Wayne LaPierre provides a fact-filled volume and tackles a number of subjects surrounding gun rights, including: arming airline pilots, animal rights extremism, media bias, gun show prohibition, self-defense, and others. His convincing arguments will cause even the most adamant gun control supporter to consider the values our forefathers fought to protect: liberty, democracy, and justice.