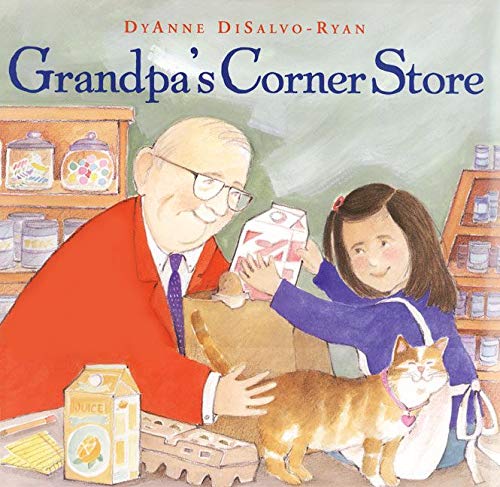 "The author/illustrator of "City Green" (1994) and "Uncle Willie and the Soup Kithchen" (1991) again celebrates community spirit, this time with a tale of a take-charge child who refuses to let her grandpa'a corner grocery quietly disappear when a big supermarket opens down the street. Having already seen the neighborhood hardware store closed by competition, Lucy indignantly rejects the idea that her grandpa would likewise knuckle under; so she is understandably dismayed when a "For Sale" sign goes up. 'The new supermarket will have everything from soup to nuts, ' Grandpa explains sadly. 'But it won't have "you,"' she rejoins--then marches off to organize the willing regulars, from her own classmates to the firefighters across the street, into a fix-it brigade. From plump resident tabby cat to worn checkerboard floor tiles, Grandpa's store positively exudes coziness, and in the final scenes DiSalvo-Ryan's industrious, multigenerational crowd is lit up as much by Grandpa's loving smile as by his bright red smock. "(Picture Book)""--"Kirkus Reviews""Age 5-8. Changes are coming to main street in Lucy's hometown. A new hardware store has opened and a supermarket is planned, leaving everyone wondering if Lucy's grandfather will sell his corner grocery store. But Lucy isn't worried. The store is too busy to be forced out of competition; everything anybody needs is right there. Every day kids pile in to buy candy, the firefighters cross the street to visit the deli, and Mr. Tutti picks up his paper. So it annoys Lucy when people ask Grandpa when he is going to sell and move to Florida. One day while helping out at the store, Lucy finds a 'For Sale' sign hidden under some bags and decides toconfront Grandpa. Yes, Grandpa is going to sell; he sees no other way. But Lucy does, and she executes a plan to organize the neighborhood to convince Grandpa to keep the store. The bright illustrations reflect the mood of the story, convey Lucy's gutsy determination, and celebrate good, old-fashioned community spirit.- -"Booklist.".".Children will empathize with Lucy and realize that they are not always powerless, that they can make a difference...This title would fit well into a social studies lesson on communities."--"School Library Journal"


Shipping rates based on 1 lb. or less weight