Artículos relacionados a The Genesis of Flight The Aeronautical History Collection... 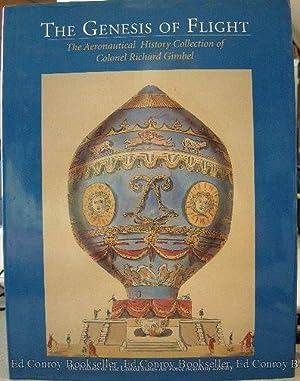 Título: The Genesis of Flight The Aeronautical ...

This volume illustrates one of the most prestigious aeronautical history collections in existence, covering the history of man's dream of flight from antiquity to the advent of powered flight at the beginning of the 20th century. The items included are drawn from more than 20,000 objects that vividly reflect both humanity's vision and its fulfilment. Five thousand year-old seals carved from semiprecious stones and used to inscribe clay tablets record the earliest conception of flight. Among the collection's thousands of books are priceless volumes printed before 1501. Many, such as Robert Hooke's Philosophical Collections (1682), are serious, scientific studies of the possibility of flight. Others are about imaginary voyages into space and to other worlds, including Ludovico Ariosto's Orlando Furioso (1547), Cyrano de Bergerac's account of a voyage to the moon first published in 1650, and , of course, the 19th century classic of Jules Verne. More than 2,000 prints, portraits, engravings, etchings, woodcuts, and lithographs comprise a unique and arresting pictorial history of aeronautics. Important letters written by pioneers of flight - Montgolfier, Blanchard, Lunardi, Lilienthal, Count von Zeppelin, Santos-Dumont, Langley, and the Wright brothers - are to be found among the collection's manuscript holdings. These are also rare commemorative medallions, sheet music, posters, dime noels, postcards and postage stamps, early flight manuals, catalogues of aircraft equipment, match boxes, and children's games and toys - all recordin The collection was assembled by Richard Gimbel (1898-1970), who began collecting while serving with the 8th US Army Air Force in England during World War II, and continued after becoming curator of aeronautical literature of Yale University. The collection was donated to the United States Air Force Academy upon his death.