Artículos relacionados a A Funny Thing Happened On The Way To The Honeymoonersai...

Portada Kean, Jane A Funny Thing Happened On The Way To The Honeymoonersai Had A ...
Imagen del editor 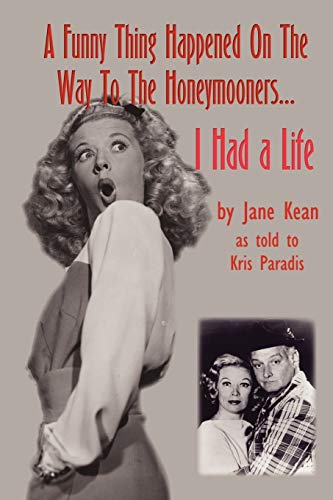 A Funny Thing Happened On The Way To The Honeymoonersai Had A Life: I Had a Life

Título: A Funny Thing Happened On The Way To The ...

Jane Kean's frank and funny memoirs of a show business life are a loving first-hand account of what growing up among Hollywood's Who's Who was like. From funny accounts of her time in Hollywood to revealing stories of her experiences on Broadway, she tells all - and tells it like it was. Jane Kean, star of Broadway, films, and television, enjoyed a career that spanned sixty years. From starring roles on stage in Early to Bed, Call Me Mister, and Ankles Aweigh, she also appeared frequently on American television on shows, such as The Danny Thomas Show, The Lucy Show, Love, American Style, The Dean Martin show, Dallas, and the soap operas Days of Our Lives and General Hospital. Jane also worked as a voice actress, notably in the perennial animated Christmas holiday classic, Mister Magoo's Christmas Carol (1962) starring Jim Backus, in which she spoke and sang the part of Belle. She also voiced roles in Disney's Pete's Dragon (1977) with Helen Reddy. Jane became a household word when she appeared with Shelia MacRae in the 1966 television version of The Honeymooners. Because of The Honeymooners complete series released on dvd, she is best known nowadays as Trixie, the wife of Ed Norton, in Jackie Gleason's unforgettable award-winning series. Jane's autobiography is concise and pulls no punches. You'll love how she has generously overfilled the book with many rare photos and illustrations from her life and career. For Jane, a funny thing happened on the way to The Honeymooners . . . she had a life, and the fascinating personal story entertains and informs as only a first-hand account can. In Jane's personal words, she was "the Lady Gaga of the Stone Age."