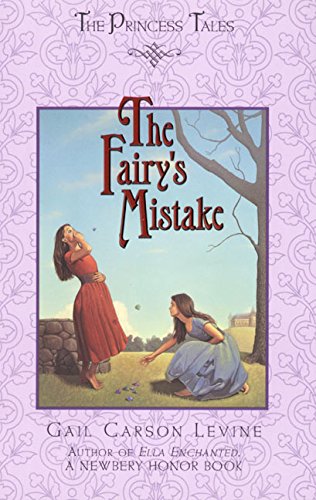 Stated First Edition, First Printing with a complete number sequence down to 1. Fine/Fine condition, binding tight and unread. This copy is SIGNED, not personalized, by the author on the title page: Happy tales to you! Gail C. Levine. This is the first book of The Princess Tales series. The way Gail Carson Levine writes, it would be unfair to state simply that she specializes in fairy tales. It is better to say that Levine finds magic everywhere in life and conjures amazing worlds for her readers to behold, whether it's retelling a fairy tale or a 1926 journey through the Harlem Renaissance, as in Dave at Night. Levine's first book, Ella Enchanted, turned paper to silver in the form of a NEWBERY HONOR. This autographed first printing is protected by a mylar cover. N° de ref. de la librería 000763

"This hand-sized volume features delicate black-and-white line drawings that are very much in keeping with the tone of many fairy tales, but those familiar with Levine's" Ella Enchanted" will wisely expect, and be gratified by, the sly and unexpected foolery of this story and its companion, " The Princess Test." In" The Fairy's Mistake, " Ethelinda is horrified to discover that her fairy blessing on the kind Rosella, that jewels fall from her mouth when she speaks, is being exploited by her greedy new husband, Prince Harold. Her curse on Rosella's sister, Myrtle, who drops slimy and creepy things from her mouth when she speaks, is also going awry; Myrtle uses this to get whatever she wants from people." The Princess Test" takes on Lorelei's ability to feel a pea under 20 mattresses: this young thing is a great trial to her family as she is allergic to, or injures herself with, almost every household item she touches. Genuinely delightful and funny, both tales are set in the village of Snettering-on-Snoakes in the Kingdom of Biddle, a place readers will want to visit again."--" Kirkus Reviews""The author of Ella Enchanted revisits similar territory in these first two installments of "The Princess Tales" series. Extended spoofs of the Grimms' ""Toads and Diamonds"" and Andersen's ""The Princess and the Pea, "" the stories feature characters with names such as Humphrey, Sam, Leonard, and Ethelinda. The action and dialogue, likewise, are down-to-earth and dryly humorous. In the first tale, a fairy rewards and punishes two sisters' respective kindness and greed, but both plans backfire wildly: Rosella ends up unhappily engaged to a prince who only has eyes for the jewels that spill fromher mouth, while people give Myrtle whatever her heart desires, so long as she keeps her mouth shut and her insects and reptiles to herself. All eventually works out, but the jokes wear thin by the end. The humor is more varied and original in the second story, in which a prince falls for a blacksmith's kind daughter but despairs of her ever passing his parents' "princess tests." He doesn't know it, but the girl's a shoo-in; Lorelei has the fragile constitution of a princess, and with her polite fastidiousness and excessive sensitivity toward food, clothing, and surroundings she easily crushes the competition-seventy-nine real princesses. Static and unnecessary illustrations accompany the stories, which are printed in an ornate, difficult-to-read typeface. Nowhere near as enchanting as Ella, but fans of funny fairy tales will have some laughs." -- "Horn Book"

I sell literary collectibles from a variety of genres, though I specialize in children?s books, mostly 20th century titles to today?s books. If you don?t see a particular title listed, please don?t hesitate to ask. The vast majority of my books are still being inventoried, so it may be I have what you are seeking. Whether it?s finding a cherished childhood favorite or helping you begin or build upon a special collection, whether you are a fellow book-lover, collector, or dealer, I very much look forward to working with you. I appreciate your business and am delighted you found my online bookstore. You are always welcome.


David Edwards, Bookseller, P.O. Box 32424, Tucson, AZ 85751. Arizona residents add 6.1% sales tax. Checks with US banks. Books may be returned within 10 days of receipt, providing prior notice, if not as described. My bookstore contains several thousand collectible children's books. Those with dust jackets are protected in transparent archival covers. With any questions, please call (520) 240-3802 or email davidkedwardsiv@gmail.com. My growing inventory is listed on abebooks.com


Shipping costs are based on books weighing 2.2 LB, or 1 KG. If your book order consists of multiple books, or if the one book you've selected is heavy or oversized, you may be contacted to let you know extra shipping is required.