Artículos relacionados a More on the Fabled FAL: A Companion to 'The FAL... 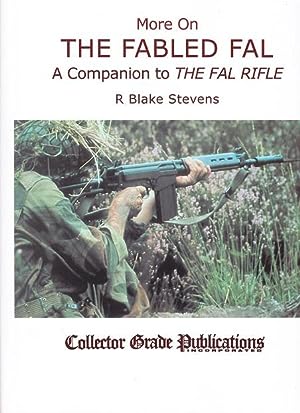 More on the Fabled FAL: A Companion to 'The FAL Rifle'

Profusely illustrated. This book is intended as a companion to the recently reprinted three volume omnibus title The FAL Rifle, which comprises our original studies titled North American FALs (1979), UK and Commonwealth FALs (1980), and The Metric FAL (1981). The book begins with a historical retrospective on the 50 FAL prototypes, with new information on ordered FAL models as produced by Fabrique Nationale (FN). An in-depth high-echelon workshop repair manual for the FAL rifle, titled Manuel de réparation et d'entretien du FAL (Manual of Repair and Maintenance [Procedures] for the FAL Rifle), under the general FN classification OREA (Outillage de Réparation et Entretien d'Arme (Tools for the Repair and Maintenance of Arms), was produced but never published by FN. A complete English translation of this manual occupies the central ten chapters of this new book. Very logically laid out with an illustrated breakdown of all the parts within each component group, the manual first establishes a set of inspection standards, and then follows up with detailed repair and replacement procedures for each component, including unbreeching and breeching the barrel. The recommended specialist tools are depicted and named, and their purpose(s) are fully described and illustrated. Next we revisit the story of how the FAL was redimensioned and redrawn for production in non metric countries, beginning with new material on the interesting prototypes produced by Canadian Arsenals Ltd (CAL), the arbiter of the inch measurement conversion programme. More new material follows on the Rifle Steering Committee, which originally comprised members from Canada, Britain and the United States, and later, after the US had dropped out and unilaterally adopted the M14 rifle, Australia. Information from various sources and new photographs of the US T48, which was considered by many as the logical replacement for the M1 rifle, are included. The book concludes with an authoritative retrospective on metric and Imperial barrel threads, barrel interchangeability, and official rebreeching instructions for the Canadian C1/C1A1 and British L1A1; an illustration of the latest investment cast FAL components including the new 'Type 4' receiver and a Bibliography. N° de ref. de la librería 001430

Título: More on the Fabled FAL: A Companion to 'The ...


Credit and debit cards accepted, we regret we are unable to accept PayPal, other methods of payment will be accepted by arrangement. Goods will be dispatched on receipt of payment. We reserve the right to refuse orders from rude or abusive customers.
Contact us by e-mail at info@militaria.co.uk, or by telephone on 01206-368-787. Registered VAT number 802-7387-33.


Orders usually ship within 2 business days, by Royal Mail Recorded service within the UK, by Royal Mail International Signed Ror airmail service to adresses outside of the UK, or by Courier if the book weighs over 1kg.
We regret we are unable to send to PO BOX adresses in some countries as insurance is not always available, we will contact you to arange delivery to a diferent adress if this is the case for your country.
Shipping costs are based on books weighing 2.2lb, or 1kg. If your book order is heavy or oversized, we will contact you to let you know extra shipping is required.