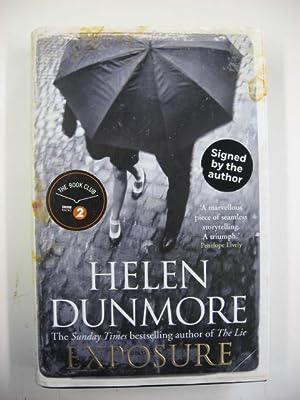 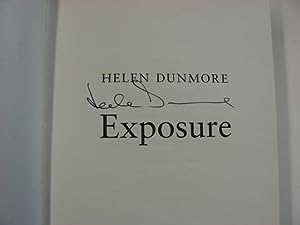 "Helen Dunmore delivers a deceptively simple masterpiece, a new take on the lives of the men and –particularly – the women caught up in the cold war ... Exposure is magnificent" (Cole Moreton Independent on Sunday)

"Dunmore packs an impressive amount on to a compact canvas. Full of convincing detail, the novel is as much about sexuality in the age of the Chatterley ban as about Whitehall skulduggery ... A dramatic mix of domesticity and derring-do ... Like many of the best spy novels, Exposure sets out to unsettle Britain’s view of itself." (Sunday Telegraph)

"Under its smooth, naturalistic surfaces, Exposure has a tightly wrought plot gripping as any thriller. But it is the union of this plot with complex, challenging characters that makes the book such a surprising and fulfilling read...will haunt you for months, if not years." (Kate Clanchy Guardian)

"It is an intriguing set-up, and with Dunmore at its helm this tale of divided loyalties never lets up for a minute ... Dunmore is such a class act ... she sticks to the human essentials of her story, does not over-complicate things, and comes up trumps yet again." (Mail on Sunday)

"Hers are expert hands at turning 20th-century history into gripping fiction." (The Times)

"Exposure succeeds as a Cold War thriller as well as a psychological drama. It deals with some lurid events, but evokes the texture of time ... It offers in fact what Dunmore does best: a story of “desperate urgency, cloaked in the everyday”" (David Grylls Sunday Times)

"One of our most outstanding writers, Helen Dunmore has drawn inspiration from the classic spy novel for her latest book ... While it has all the thrill and menace of a John Le Carré novel, Dunmore is more interested in the personal ... An atmospheric read full of vivid characters – if you only buy one book this month make it this one." (Good Housekeeping, Book of the Month)

"The danger with ‘literary thrillers’ is simple: the more literary a story is, the less thrilling it can be. There’s a balance to be found, and Dunmore expertly weights both sides. She revels in layers of concealment. Beautiful poetic phrases, quite startling at times, enliven the eye and the mind." (Spectator)

"Helen Dunmore's subtle tale of espionage and fear has a refreshingly human scale... It is, in many ways, a romance where salvation comes through a late, unexpected and generous act of love." (Independent)

"Dunmore’s treatment is distinctive. Her work as both a poet and a novelist, is characterised by its rich sensuality and the stark emotional truths at its core. This sensibility, along with the small domestic and personal details at which she excels, transcend genre..." (Catherine Taylor Financial Times)

We are now installed in a newly opened Oxfam Bookshop in a central location in this lovely North Yorkshire town. In addition to our internet stock, we have a good and varied selection of books, plus stamps, postcards and music (including vinyl and sheet music). Please come and browse whenever you are near - all our stock is donated, and profits from our shop and online sales all go to further Oxfam's work worldwide.


Any book ordered from us is returnable within 30 days if found not to match the
description given. A full refund will be made. Payment may be made by Credit
card only. Post and packing is extra, at cost. If ordering from outside the
United Kingdom, please indicate preference for surface or (priority) air-mail.
When choosing to buy one of our books you are making a valuable contribution to
Oxfam's work, helping to find lasting solutions to poverty and suffering
throughout the world.


Post and packing are extra at cost. Shipping costs are based on books weighing 2.2 LB, or 1 KG. If your book order is heavy or oversized, we may contact you to let you know extra shipping is required.