Artículos relacionados a The Experiences of Tiresias: The Feminine and the Greek...

Portada Loraux, Nicole The Experiences of Tiresias: The Feminine and the Greek Man
Imagen del editor 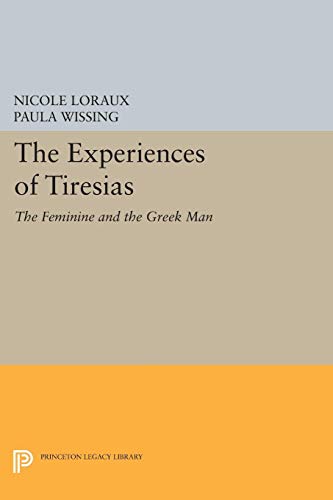 The Experiences of Tiresias: The Feminine and the Greek Man

Título: The Experiences of Tiresias: The Feminine ...

"Nicole Loraux documents, with delicate sensitivity to text and context, the mobility of the contrast between 'man' and 'the feminine'. . . . [Her] readings of tragedy are particularly compelling."--Mary Margaret McCabe, The Times Literary Supplement

"Nicole Loraux invites us on a journey across the Greek representations of the human body-its sufferings, its wounds, its death, as well as its beauty.... [Whereas the writings of such historians as Herodotus and Thucydides render women opaque,] Loraux washes the palimpsest and makes us rediscover the flesh and blood presence of the female body."--Pierre Chuvin, Le Monde

"Nicole Loraux's book is not only a subtle and rigorous study of the opposition between the masculine and the feminine, which so strongly shapes the Greek `imaginary.' It is also, through consistently illuminating rereadings of texts ranging from epics to works of historians, [an examination] of the diverse ways in which Greek men have denied femininity, not without having appropriated it to themselves in various forms."--Louise Bruit, Qinzaine littéraire

"Loraux is a pioneer in the analysis of gender difference and sexuality in classical Greece. Strongly opposed to polarized interpretations of `masculine' and `feminine,' she illuminates the complex and often contradictory interrelationship of the sexes in real life and in the Greek/Athenian social `imaginary.'. . . An essential work of classical scholarship."--Choice

"In her generous and passionate manner, Nicole Loraux brings into bloom an entire field of Greek studies and discovers, behind the serene images that Athenian democracy has created of itself, a terra incognita full of noise and fury."--Catherine David, Le Nouvel Observateur