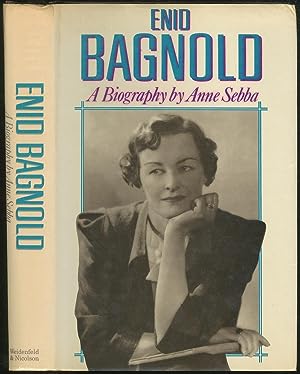 First edition. 317pp. Illustrated with black and white photographs. Corners bumped else near fine in near fine dustwrapper with corresponding bumps. Laid in is a Typed Letter Signed from Sebba to Tony Award-winning actress Marian Seldes that precedes the publication of the book, and thanking her for anecdotes about Bagnold, and asking additional questions. Additionally laid in is an envelope Signed by director Anthony Harvey ("as "Tony") to Seldes sending the book and noting that it has ", - great stuff about The Chalk Garden." a play written by Bagnold. Seldes appeared in the original production of the play. Seldes has made a tiny pencil note indentifiying "Tony" as "Tony Harvey" with the date she received the book. N░ de ref. de la librerÝa 420248

'This lively biography reveals a passionate woman who was painfully aware of the difficulties of living as a writer and as a wife and mother.' Times This remarkable biography brings to life one of the most active and gifted women of her generation. Best known as the author of National Velvet and The Chalk Garden, Enid Bagnold was born in 1889 and was determined from an early age to have it all: literary acclaim, social success, motherhood, marriage and lovers. In Chelsea she painted with Sickert and was sculpted by Gaudier Brzeska. As a journalist, she worked with and was seduced by Frank Harris. Having worked as a VAD during the First World War, she wrote an expose of hospital cruelty which won her instant fame. Her marriage to Roderick Jones, head of Reuters, enabled her to combine motherhood and a glittering social life with the thrill and turmoil of a long and varied career on both sides of the Atlantic. Although the post-war film of National Velvet brought her international acclaim, her passion remained the theatre, involving such luminaries as Cecil Beaton, Edith Evans, Gladys Cooper, Irene Selznick, Charles Laughton and John Gielgud. 'An extremely readable and often revelatory book that portrays not only the authoress of The Chalk Garden but also the complex social period through which she lived.'. Financial Times