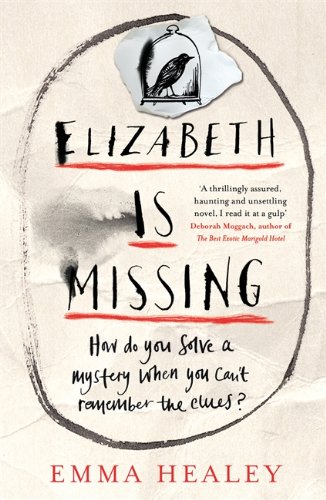 Críticas: The novel is both a gripping detective yarn and a haunting depiction of mental illness, but also more poignant and blackly comic than you might expect from that description... perhaps Healey's greatest achievement is the flawless voice she creates for Maud. (The Observer)

A compelling mystery that capture the experience of Maud, a highly memorable elderly woman losing her memory (Sunday Express)

A thrillingly assured, haunting and unsettling novel, I read it at a gulp (Deborah Moggach)

One of those semi-mythical beasts, the book you cannot put down (Jonathan Coe)

Already being tipped for literary stardom. At the London Book Fair last April, nine publishers fought for her debut, Elizabeth is Missing... a tale of dementia, its TV rights have already been sold (Evening Standard's Fourteen in 2014)

Memory - or the lack of it - continues to be a big theme in fiction. The manuscript of this debut mystery narrated by an 81 year old who can't quite remember what she's investigating created a buzz at the London book fair in 2013 (Guardian's 2014 Books)

Elizabeth is Missing will stir and shake you: an investigation into a seventy-year-old crime, through the eyes of the most likeably unreliable of narrators. But the real mystery at its compassionate core is the fragmentation of the human mind. (Emma Donoghue, award-winning author of Room)