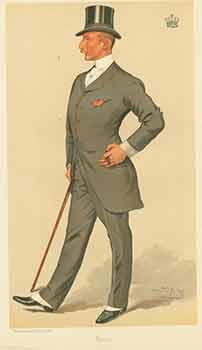 The Earl of Albemarle; Arnold. Issue 1353. (First edition before the bound volumes.)

Original colour lithograph. 40 x 27 cm (15.75 x 10.6 inches). Good. Half-inch tear and minor foxing and toning in margins, not affecting image. Dated Oct 4, 1894. Vincent Brooks, Day & Son (Lith.). Scarce.Arnold Allan Cecil Keppel, 8th Earl of Albemarle, GCVO, CB, VD, TD, JP (1 June 1858 - 12 April 1942), styled Viscount Bury from 1891 to 1894, was a British soldier, courtier and Conservative politician. Lord Albemarle was the eldest son of William Keppel, 7th Earl of Albemarle, and his wife Sophia Mary, daughter of Sir Allan Napier McNab, 1st Baronet, a Canadian politician, and was educated at Eton College. He served with the Scots Guards, achieving the rank of Lieutenant. In 1892 he was returned to Parliament for Birkenhead, a seat he held until 1894 when he succeeded his father in the earldom and took his seat in the House of Lords. Albemarle commanded the Prince of Wales's Own Civil Service Rifles with the rank of Colonel from 1892 to 1901.After the outbreak of the Second Boer War in October 1899, a corps of imperial volunteers from London was formed in late December 1899. The corps included infantry, mounted infantry and artillery divisions and was authorized with the name City of London Imperial Volunteers. It proceeded to South Africa in January 1900, returned in October the same year, and was disbanded in December 1900. Lord Albemarle was appointed in charge of the infantry division on 3 January 1900, with the temporary rank of lieutenant-colonel in the Army, and served as such until the corps was disbanded. He was mentioned in despatches, received the Queen's South Africa Medal with four clasps, and was in 1900 appointed a Companion of the Order of the Bath (CB) for his services in South Africa. Albemarle was later an Honorary Colonel in the 5th Battalion of the Norfolk Regiment and a Brigadier-General from 1901 to 1906 in the Norfolk Volunteer Infantry Brigade and was awarded the Territorial Decoration. He was an Aide-de-Camp to both Edward VII and George V, and was appointed a Member of the Royal Victorian Order (MVO) in July 1901, advanced to a Knight Commander (KCVO) of the same Order in 1909, and promoted to a Grand Cross (GCVO) in the order in 1931. Lord Albemarle served in the Conservative administrations of Bonar Law and Stanley Baldwin as a Lord-in-Waiting (government whip in the House of Lords) between 1922 and 1924. He was elected a Fellow of the Zoological Society of London (FZS) in July 1902. N░ de ref. de la librerĒa 18-1189

We deal in antiquarian books, prints, posters, paintings and other art related material. We are also a publisher and distributer of art reference books, primarily catalogues raisonnķs. We are related to Alan Wofsy Fine Arts and Dow & Frosini. Look for us at www.art-books.com