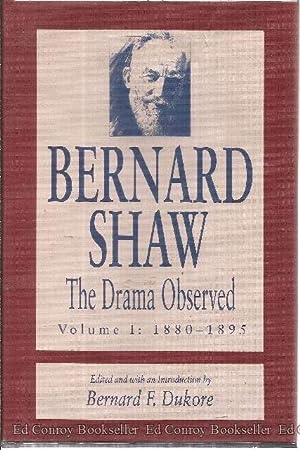 By common consent, Bernard Shaw is the best drama critic in the English language, and certainly the most incandescent. Shaw wrote about drama professionally for seventy-one years, from 1880, when he wrote a review of Henry Irving's production of The Merchant of Venice, to 1950, when he debated Terence Rattigan on ideas in the drama. Shaw commented on a wide range of drama, including that of ancient Greece, Elizabethan England, traditional Japan, and modern Europe; and he examined drama in the widest sense of the term, including pantomime plays and silent movies, radio and talking movies, and television. Among the characteristics of Shavian dramatic criticism is an astonishingly wide range of literary, social, and popular allusions whose sources Shaw does not usually announce but which The Drama Observed annotates. Shakespeare, Dickens, and the Bible appear most frequently, but Shaw also mentions a myriad of other sources. In one case, he compares Homer's description of the battle between Achilles and Asteropaios to an account of a boxing match in an 1859 magazine. In another, using a phrase that his readers would understand, he likens an actress's costume to that of a waitress in an Aerated Bread shop. A single paragraph in one review refers to the American debate about the gold and silver standards, a Dickensian character, a Scottish-American grammarian, a theologian, a Christian socialist, an art critic, and a fraudulent financier. Such references are annotated to provide today's readers a cultural context and a framework that explains Shaw's meaning. The Drama Observed contains 318 separate items, arranged chronologically, of which 100 are new to today's readers: 85 unpublished since their first, sometimes anonymous appearance, 12 published for the first time, and 3 published in full for the first time. Included are The Quintessence of Ibsenism and all Shaw's reviews published in The Saturday Review. A comprehensive essay introduces the seven decades of Shaw's criticism.