Artículos relacionados a Dodge City The Cowboy Capital and the Great Southwest...

Portada Wright, Robert M Dodge City The Cowboy Capital and the Great Southwest in the ... 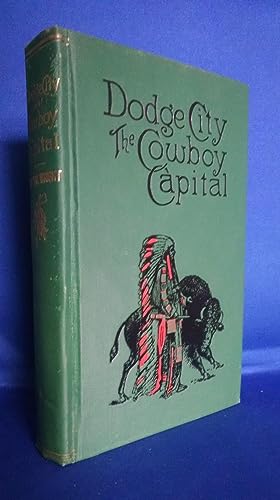 Dodge City The Cowboy Capital and the Great Southwest in the Days of the Wild Indian, the Buffalo, the Cowboy, Dance Halls, Gambling Halls and Bad Men

Mylar protected pictorial green cloth boards w/ gilt titling on spine and black titling on cover w/ vignette / No DJ as issued. Binding square and tight, Covers bright but lightly soiled/rubbed w/ square corners, text block bright, clean and unmarked throughout on pages w/ sporadic light foxing to thicker eps/plates and light dusting/soiling to page ends. 342 pps, portis, no publish or date named (2nd prtg ca 1930 of orig 1913 per biblio ref, same collation but frontis repl by portis), illus's, photos. A scarce, riveting first-hand account of the development of Dodge City from before Fort Dodge in 1864, through the establishment of Dodge City as well as the city's decline and subsequent revival up to 1913. A classic and one of the first books about Dodge City, its indians, soldiers, traders, buffalo hunters, railroads, cowboys, outlaws, lawmen, and commerce by one who was there and willing to tell personal stories and observations about them all. .Howes W76, Adams Herd 2564, Six-Guns 2456, Adams 150 149, Dobie p125, Reese Six-Score 85, Graff 4756, Reese Six-Score 118. N° de ref. de la librería 000548

Título: Dodge City The Cowboy Capital and the Great ...