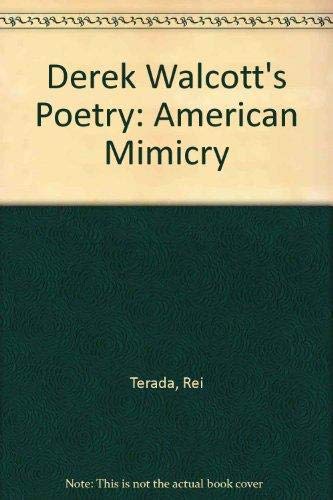 This copy is LIKE NEW; the text is clear, bright, and unmarked; binding is tight. Apparent first edition (unstated but earliest appearance of the book). STATED FIRST PRINTING. The jacket is like new: absolutely intact in all ways, including perfect color and design, but slight shelfwear. We have a five star rating because of our fulfilment success and because our descriptions are accurate. All shipments within U.S. sent with Tracking. On foreign sales, because of the heavy weight of this book, we have to charge extra for shipping: however, we will only charge the difference between our regular shipping rate and the extra charge that the U.S.Post Office asks to ship the book. We guarantee: NO NASTY SURPRISES. N° de ref. de la librería 019228

With the 1989 publication of his epic poem, Omeros, Derek Walcott stands as a major poet of the twentieth century. However, while most critics agree that Walcott's writing warrants considerable attention, they fault it for being too derivative. Rei Terada deals explicitly with facets of Walcott's work that are often misunderstood by critics and other readers. Terada is particularly interested in Walcott's provocative hypothesis that there is a collective America extending, in Walcott's own words, "from Greenland right down to Tierra del Fuego" and that emanating from this collective America is an art characterized by mimicry. Thus, American art as Walcott perceives it is a representation of a representation--a repetition of something itself repetitious--rather than a representation of reality. Walcott recognizes that the opposition between mimicry and originality is vital and unavoidable. He both acknowledges this vitality and resists the opposition. Terada describes this approach as one of the most ancient and critical oppositions in Western culture. She considers the ways in which Walcott's poetry, written from this ambiguous vantage point, illuminates the relationship of American poetry to Old World culture, as well as the ways in which American languages relate to one another and to the material world. While mimetic theories of art hold that culture is a representation of something original (nature), Walcott's does not. Thus, he must re-examine the relationship between culture and nature. Beginning broadly with Walcott's mental map of the world, Terada demonstrates how his "geographic imagination" is played out in Omeros. She goes on to explore Walcott's unusual openness to hispoetic precursors, among them Homer, Beaudelaire, John Donne, William Butler Yeats, and Robert Lowell, which for some critics is as problematic as his adoption of the creoles and dialects of the Caribbean. Terada also discusses his denial of literature as property in the context of p