Artículos relacionados a Each Day Dies With Sleep 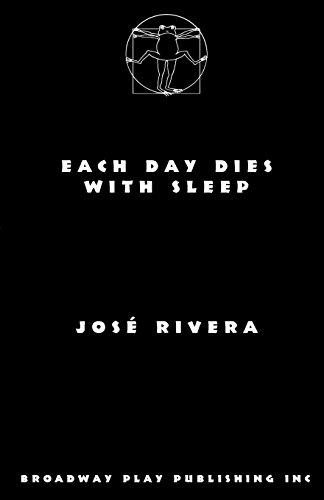 Each Day Dies With Sleep

Título: Each Day Dies With Sleep

Written by José Rivera, Academy Award nominee for The Motorcycles Diaries, EACH DAY DIES WITH SLEEP is the story of a young woman's struggle to find an identity apart from the two men in her life, her father and her husband. This fantastical tragicomedy leaps from coast to coast and from one outrageous moment to the next. "Here is a production to restore our faith in live theater, and a play to restore our interest in new theater. Jose Rivera ... an American playwright born in Puerto Rico - wrote EACH DAY DIES WITH SLEEP ... it's real subject is the primitive human struggle between animal instincts and civilized order. The language - poetic, intense, heightened, rude, stunted, funny, by turns - is always vivid. I simply testify that it is months since I was so worked up by characters in a play as here ... Rivera's play brings fresh imaginative vitality to the London theater. Its conception of the human condition as a psychic battleground - lively, funny, erotic, tragic - has a rare force." -Alastair Macaulay, Financial Times "Surrealism, magic realism, expressionism, alternate-world realism - Rivera's tortured triangle of father, daughter and son-in-law writhes across the entire map of modern Hispanic literature, in a beautifully lofty English - unsettling, disturbing, rich with excitement and hope." -Michael Feingold, Village Voice