Portada Lewin Tony The Complete Book of BMW: Every Model Since 1950 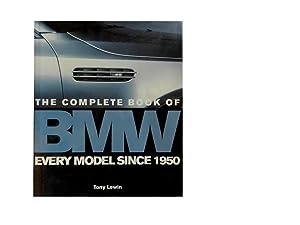 The Complete Book of BMW: Every Model Since 1950

Reseña del editor: The Complete Book of BMW is a master work. The word 'definitive' is a bold claim but this book should be viewed in this light. It is the most comprehensive survey of BMW Group models from the 501 right up to this year's 1 and 6 Series published in the English language. Data tables covering specifications, production volumes and prices will be invaluable to the BMW enthusiast and the layout and production volumes are second to none. Tony Lewin deserves high praise for this outstanding book. - Chris Willows, Corporate Communications Director, BMW Great Britain BMW is the most remarkable phenomenon to hit the auto industry in a generation. Celebrated for its luxury sports cars, motorcycles and aero engines in the pre-war era, it squandered its glamorous heritage in the 1950s; on its knees and near-bankrupt, it was rejected as a lost cause when offered by desperate banks to Mercedes-Benz. But thanks to a wealthy German aristocrat, a brilliant engineer and a young and inspirational manager, Mercedes would soon regret not having scooped up the once-glorious firm: pioneering the concept of the compact, high-quality sports saloon, the visionary new team systematically built BMW into the spectacular success we know today. Through the most expressive medium of all - the cars themselves - The Complete Book of BMW tells the story of one of the most remarkable turnarounds of the century. From the iconic 2002tii of the 1960s through the mighty M3 of the 1990s to today's born-again MINI and the crowning glory of the Rolls-Royce Phantom.- Every model since 1962- Technical specifications and performance data- Production and sales data- Key decisions that made BMW great- Von Kuenheim's brilliant template- Taking technology leadership- 1,600 color photographs- The new focus: premium at every levelAbout the AuthorTony Lewin is an automotive writer and commentator specializing in the business and design sides of the auto industry. He has reported on the automobile sector for more than two decades as editor of industry publications such as What Car?, Financial Times Automotive World and World Automotive Manufacturing, and as a regular columnist in magazines and newspapers in Europe, Japan and the United States.General AudienceThe Complete Book of BMW tells the remarkable story of the company and its cars. From the luxury sports cars and motorcycles of the pre-war era through its rebirth at the hands of a wealthy German aristocrat, a brilliant engineer, and an inspired manager during the past two decades, the book uses the most expressive medium of all-the cars themselves-to illustrate the story of one of the most remarkable turnarounds in automotive history.

1. The Complete Book of BMW: Every Model In the World Since 1950

2. The Complete Book of BMW: Every Model In the World Since 1950