Artículos relacionados a Clubbed to Death 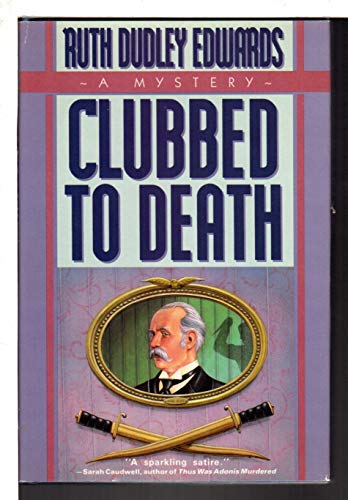 Hardback 1st ed 1st printing. 190 pp Both book and dust jacket are in very good condition. The book is inscribed "To Robert, with assurances that no remarks about the Foreign Office in here represent the author's view. All good wishes, Ruth". N° de ref. de la librería 102750

The British fondness for tradition is no secret, but some members of London's ffeatherstonehaugh's club (pronounced "Fanshaw," naturally) seem to be taking things a bit too far, bumping off officers of the club who threaten their ordered, if highly eccentric, way of life. After the club secretary allegedly jumps to his death from the club's gallery, Robert Amiss, conveniently unemployed at the moment, agrees to help his friends at the Police Department get to the bottom of things. Hiring on as a club waiter, Amiss finds himself caught up in a bizarre caricature of a club, run by and for debauched geriatrics, with skeletons rattling in every closet. The portraits are of roues, the library houses erotic literature, and the servants are treated like Victorian lackeys - on a good day.
Why are there so few members? How are they financed? Will Amiss keep his job - and his cover - despite the enmity of the ferocious, snuff-covered Colonel Flagg? The answers lie in this ingenious, uproarious mystery that will keep you guessing - and laughing - until the very end.


Peter Rulton Manaton, 20 Pinsley Road, Leominster, Herefordshire. HR6 8NW.
prultonbooks@aol.com 07855832888. Books may be returned, with prior notice,
within 14 days if not completely satisfied.